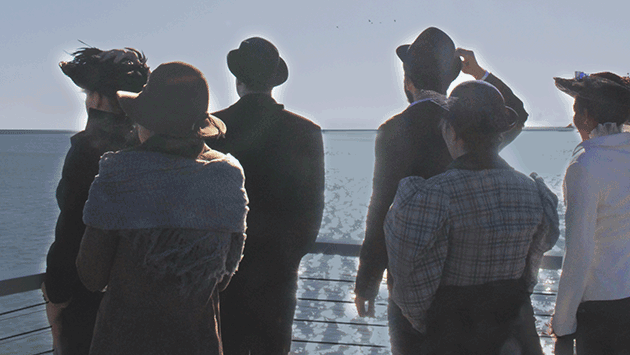 The 73rd annual Dolphin Show will bring a powerful Broadway musical based on the epic 1912 North Atlantic Ocean disaster to life this month on Northwestern University’s Evanston campus.

“Titanic,” an award-winning show features an ensemble of historically accurate characters to tell the story of the maiden voyage of the RMS Titanic, the largest and most luxurious ocean liner of its time, its remarkable journey and tragic ending.

This year’s Dolphin Show is co-produced by School of Communication senior Jack Eidson and School of Education and Social Policy senior Isabel Garcia, with support from a cast and team of more than 150 Northwestern University students.

Promoted as “America’s largest student-produced musical,” the production features music and lyrics by Maury Yeston and a book by Peter Stone. The show originally opened on Broadway in 1997 and won five Tony Awards, including Best Musical.

The Titanic’s maiden voyage transcended the lines of class by bringing more than 2,000 passengers and crew together, bound by wonder and the hope for a better life. For more information on the 2015 Dolphin Show visit .

Northwestern’s Dolphin Show evolved from a 1940s swim team fundraiser to an annual professional-caliber musical production. Working on every aspect of the production, the students serve as on-stage talent and behind-the-scenes crew members, marketing managers and fundraisers.

Single tickets to “Titanic” performances range in price from $15 to $30 for the general public; and $10 to $5 dollars for students. Discounted tickets for groups of 10 or more also are available.

Tickets can be purchased online, by phone at 847-467-4000 or fax at 847-467-1831, or in person (during ticket office hours) at the Bienen School of Music’s Pick-Staiger Concert Hall, 50 Arts Circle Drive. Tickets at the door, subject to availability.