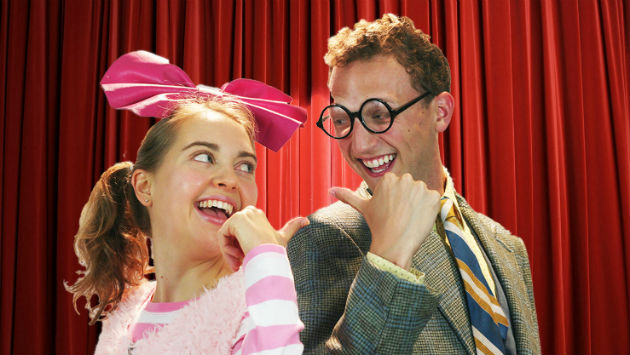 Get ready for a hilarious songfest ripped from the pages of Mo Willems’ award-winning “Elephant and Piggie” book series for young readers. The family-friendly musical will leave audiences doing the “Flippy Floppy Floory” dance all night long.

Presented by Northwestern University’s Virginia Wadsworth Wirtz Center for the Performing Arts’ as part of its SummerStage 2016 offerings, the July 30 through Aug. 7 Imagine U production of Elephant and Piggie’s “We are in a Play!” will be staged at the Ethel M. Barber Theater, 30 Arts Circle Drive, on the Evanston campus.

In addition to eight morning, matinee and early evening performances, the Wirtz Center also will host an “Elephant and Piggie” Block Party from noon to 4 p.m. Saturday, Aug. 6. Free and open to the public, the outdoor event will take place on Northwestern’s Arts Circle, in front of the Barber Theater. It will feature performances, children’s games, face painting, food, animal shelter pets available for adoption and more. In the event of rain, the festivities will be moved indoors to the Barber Theater lobby.

Elephant and Piggie’s “We are in a Play!”

The hourlong show is recommended for children ages 5 and older. It features book and lyrics by Mo Willems, music by composer, music director and orchestrator Deborah Wicks La Puma and a cast of five Northwestern University students. It is directed by Lauren Shouse, an award-winning theater director, dramaturg, teacher and Northwestern alumna, who is the literary manager at Chicago’s Northlight Theatre.

The musical tells the story of Elephant Gerald and Piggie, who are the best of friends. Worrisome and careful Gerald wonders if something could go wrong that would end their friendship. But playful and spirited Piggie is not worried at all, especially when she receives an invitation to a party hosted by the Squirrelles, a trio of singing squirrels who love to have a good time. And so begins a day when anything is possible in an imaginative musical romp that playfully explores the importance and true meaning of friendship.

All tickets for the Aug. 4 performance will be sold for only $8. Tickets for all other dates are $12 for the general public and $10 for children 18 and under and Northwestern students.

Single tickets and discounted tickets for groups of eight or more are on sale now online and can also be purchased through the Wirtz Center Box Office at 847-491-7282.

Now in its 5th year, Imagine U productions are geared toward children and their families. The events are produced by the School of Communication’s Virginia Wadsworth Wirtz Center for the Performing Arts. Performances often include an opportunity for children to interact after the show with the cast and receive colorful take-home programs filled with activities, art projects, fun facts and games. Past productions have included “The Hundred Dresses,” “James and the Giant Peach,” “Charlotte’s Web,” “A Year with Frog and Toad” and more.