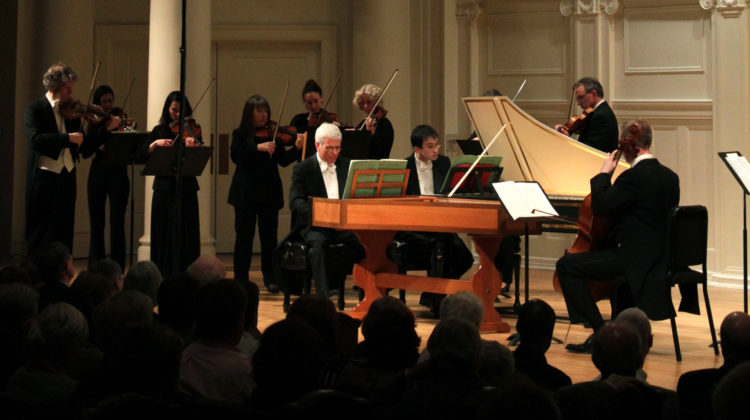 Evanston’s 46th annual Bach Week Festival will present concerts in Evanston and Chicago April 26 to May 3, 2019, featuring several Johann Sebastian Bach works never before heard at the festival; the return of pianist Sergei Babayan, praised by The New York Times for his “consummate technique and insight”; and a first-time collaboration with gifted pre-college musicians of the Academy of the Music Institute of Chicago.

J. S. Bach works to be performed for the first time at Bach Week include the Prelude and Fugue in B Minor, BWV 544; celebratory wedding cantata “O holder Tag, erwünschte Zeit,” BWV 210; and church cantata “Bringet dem Herrn Ehre seines Namens,” BWV 148, according to Richard Webster, Bach Week’s long-time music director and conductor. Webster performed in and helped organize Evanston’s inaugural Bach Week in 1974 and has been music director since 1975.

Other new programming twists, Webster says, include opening the festival with Spanish Baroque composer Antonio Soler’s fiery Fandango for harpsichord and including in the festival lineup, for variety and contrast, a concerto for woodwinds, brass, and strings by Italian Baroque composer Antonio Vivaldi and a well-known instrumental suite for recorder and strings by Bach’s German contemporary and rival, Georg Phillip Telemann.

Pianist Babayan will be soloist in Bach’s Keyboard Concerto No. 3 in D Major, BWV 1054, accompanied by an ensemble of professional musicians of the Bach Week Festival Orchestra and string students from the Music Institute Academy.

Webster notes a historical precedent for the participation of pre-professional musicians. Many of Bach’s secular instrumental and vocal works received their premieres in concerts given by his Collegium Musicum, an ensemble of talented local university students, at Zimmermann’s coffee house in Leipzig, Germany.

Babayan is a Bach Week mainstay who is working his way through Bach’s complete solo keyboard concertos during return visits to the festival. Recently signed to the Deutsche Grammophon record label, Babayan received critics’ applause for recent concerts with his superstar pupil, pianist Daniil Trifonov, and his 2018 album “Prokofiev for Two” with pianist Martha Argerich. He teaches at The Juilliard School in New York and is artist-in-residence at the Cleveland Institute of Music.

Also new to the festival is baroque violinist Kiyoe Matsuura, who, with lutenist Joel Spears, will present an intimate Candlelight Concert focused on J. S. Bach’s Suite for Violin and Continuo, BWV 1025, and its origins in a work for solo lute by German virtuoso lutenist and composer Silvius Leopold Weiss, who visited the Bach household.

The festival is a partnership between the Bach Week Festival and North Park University’s School of Music, Art, and Theatre.

The 2019 Bach Week Festival is supported by grants from the MacArthur Funds for Arts and Culture at the Richard H. Driehaus Foundation, Illinois Arts Council, Elizabeth F. Cheney Foundation, and Howard and Ursula Dubin Foundation.

A musical rite of spring on the North Shore since 1974, Bach Week is one of the Midwest’s premiere Baroque music festivals. The event enlists musicians from the Chicago Symphony Orchestra, Lyric Opera of Chicago Orchestra, and other top-tier ensembles, while featuring some of the Chicago area’s finest instrumental and vocal soloists and distinguished guest artists from out of town.

All tickets for the April 26 Candlelight Concert are $25 and include a glass of champagne and a selection of gourmet chocolates.