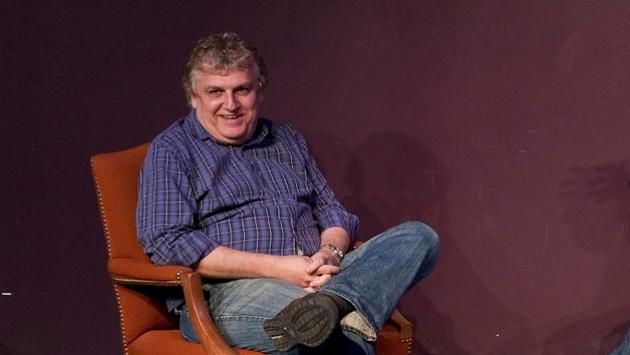 Evanston resident Jimmy Carrane, former host of Studio 312 on Chicago Public Radio, is proud to be bringing his hit podcast, Improv Nerd, to Northwestern University for a live recording on Feb. 26. This free show will take place at 7:30 p.m. at Harris Hall, 1881 Sheridan Road, in room 107.

In each episode of this live talk show, Jimmy interviews an icon in the world of improv about his or her creative process and career in comedy. Then laugh along as Jimmy performs a totally unscripted scene with each of his guests and learn how they created the scene in a revealing interview and question-and-answer session.

This time, Jimmy will be interviews Noah Gregororpoulos, a long-time Chicago improviser and one of the most respected teachers and performers at iO Chicago – an improv comedy training center that has launched the careers of people such as Tina Fey, Amy Poehler, Chris Farley, Mike Myers and others. Gregororpoulos is also an alumnus of Northwestern University.

Since the live show and podcast began in September 2011, Jimmy has released more than 100 episodes with interviews of such guests as Jeff Garlin, Andy Richter, David Koechner, Rachel Dratch, Tim Meadows, Comedy Central’s Key & Peele, Scott Adsit and others. Previous Evanston residents (and former Evanston residents) who have appeared on the show include Lauren Lapkus, Peter Gwinn, and Bill Arnett.

Don’t miss your chance to see this podcast live!

Raised on the North Shore in Kenilworth, IL, Jimmy Carrane learned at a young age that fat kids in big families are required to be funny.

After studying at Second City in his late teens, he went on to perform with some of the biggest names in comedy, including Mike Myers, David Koechner, Tim Meadows, Andy Richter and more. An original member of The Annoyance Theater and Armando at The IO-Chicago, Jimmy wrote and starred in several acclaimed one-man shows including “I’m 27, I Still Live at Home and Sell Office Supplies” and “Living in a Dwarf’s House,” and also performed in groundbreaking shows such as “Godshow” and “Naked” with MadTV’s Stephanie Weir.

Today, Jimmy lives in Evanston, IL, and is a renowned and respected improv teacher, having taught at The Second City, IO-Chicago, The Annoyance, Victory Gardens and other locations for more than 25 years. He is the co-author of “Improvising Better: A Guide to the Working Improviser.”

Jimmy’s voice was well-known to Chicagoans during the seven years he contributed to and hosted Studio 312 on Chicago Public Radio. His film and TV credits include “The Playboy Club,” “Public Enemies” with Johnny Depp, “ER,” “Natural Born Killers,” “Early Edition,” “The Untouchables,” “Stash” and “Tapioca.”