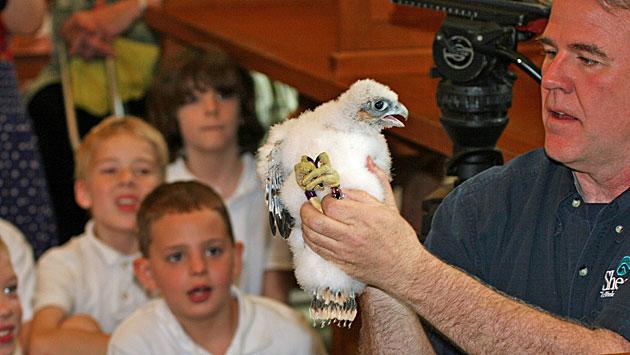 The baby falcons (eyases) will also be named at the event which is free and open to the public. Hennen and Engel will take questions from the press and the public. Limited seating.

Details: Once on the Endangered Species list, Peregrine Falcons have made a dramatic recovery. Today there are about 20 pairs of Peregrines in the Chicago area. The banding process is a critical tactic in supporting the Peregrine population. The baby falcons will be removed from the nest, brought indoors for banding, blood sampling, and viewing, then returned to the nest.

This is the 9th year that Nona, the mother, and Sqauwker, the father have nested together at the Library.  This is the 11th consecutive year that a pair of Peregrines has nested at the Evanston Public Library.

The EPL falcons can be viewed live at www.epl.org/falconcam. There is a dedicated falcon Facebook page at www.facebook.com/eplfalcons. More information about the Chicago Peregrine Falcon program can be found at http://fieldmuseum.org/explore/illinois-peregrines.The library is currently hosting an photography exhibit of the EPL falcons by Evanston photographer Ted Glasoe.