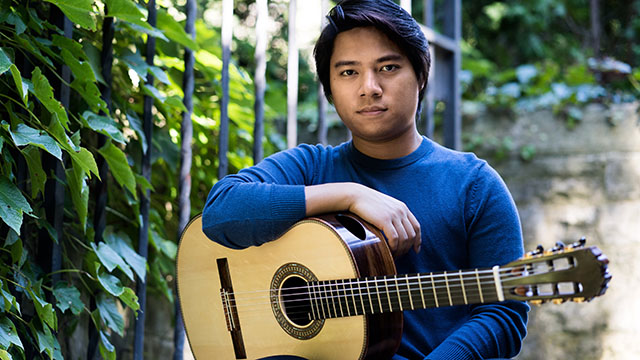 Closing the series May 9, 2020 is New Orleans International Guitar Festival Competition winner An Tran, marking the first Segovia concert by a Bienen School of Music student.

All performances begin at 7:30 p.m. in the Mary B. Galvin Recital Hall, located in the Patrick G. and Shirley W. Ryan Center for the Musical Arts, 70 Arts Circle Drive on the Evanston campus.

Artistic director Anne Waller, Bienen senior lecturer in music performance, founded the series to coincide with the 100th anniversary of the birth of legendary Spanish guitarist Andrés Segovia. The series showcases established and emerging artists from around the world, who bring their teaching skills and performance artistry to Northwestern and Chicago-area audiences.

The Grammy Award-nominated guitarist’s international tours have taken him to celebrated musical centers, including London’s Royal Albert Hall and Amsterdam’s Concertgebouw, and he has appeared with such prestigious ensembles as the Philadelphia Orchestra and the Boston Symphony. In this program, Barrueco performs music of Cuba and Spain, including “Cantos Yoruba de Cuba” by Héctor Angulo, selections from Isaac Albéniz’s “Suite Española” and more.

A 2006 winner of the Concert Artists Guild International Competition and a 2016 Latin Grammy Award nominee, the Brasil Guitar Duo is known for its innovative programming. Their performance features works of Jean-Phillipe Rameau, Mario Castelnuovo-Tedesco, Leo Brouwer and more.

First-prize winner in the 2018 Guitar Foundation of America International Competition, Feuillâtre has studied with Roland Dyens, Tristan Manoukian and Judicaël Perroy. His second recording will be released on the Naxos label in 2019.

Lutenist Barto is the first-prize winner of the 1984 International Lute Competition in Toronto, as well as a top prize-winner in the Musica Antiqua Competition in Bruges, Belgium. He has given solo recitals in the Festival of Flanders, London’s Purcell Room, the Utrecht Festival and New York’s Music Before 1800 concert series. His program will feature music for both lute and vihuela, a Spanish guitar-shaped string instrument.

First-prize winner of the Vietnam National Guitar Competition and the New Orleans International Guitar Festival Competition, Tran has appeared throughout North America and Asia as a soloist and chamber musician. Deeply connected to his native country, he is committed to bringing traditional Vietnamese music to the international concert stage. Watch the video of An Tran preparing for his Bienen School student recital.

Single tickets are $30 for the general public and $10 for students with a valid ID, and are available online at concertsatbienen.org, by phone at 847-467-4000 or by visiting the box office located in Pick-Staiger Concert Hall, 50 Arts Circle Drive.

Segovia Classical Guitar Series subscriptions also are available and include a variety of benefits. For more information, call the Bienen School of Music Ticket Office at 847-467-4000 or visit concertsatbienen.org.