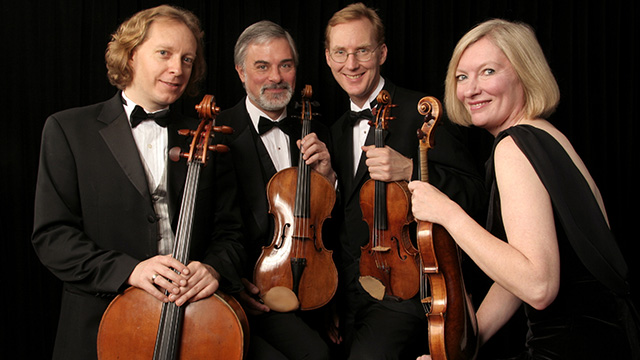 Poised to enter its fifth season, the Skyline Piano Artist Series (Oct. 18, 2019 to May 1, 2020) highlights piano mastery over the course of six performances.

The Winter Chamber Music Festival (Jan. 10 to 26, 2020) welcomes internationally renowned artists over three weekends during the month of January.

The Segovia Classical Guitar Series (Oct. 11, 2019 to May 9, 2020) features an array of performing styles on guitar, lute and vihuela (a 15th- and 16th-century precursor to the modern guitar, originating in Spain, Portugal and Italy).

Pianist Jeffrey Siegel shares the stories behind centuries of piano masterpieces, from Haydn and Mozart to Gershwin and Joplin, in his Keyboard Conversations series (Sept. 27, 2019 to May 8, 2020).

Subscriptions are now on sale for the four series and may be purchased online at concertsatbienen.org, by phone at 847-467-4000 or in person at Pick-Staiger Concert Hall, 50 Arts Circle Drive in Evanston, during ticket office hours.

The subscription series and programs are as follows:

• Haydn and Mozart: Humor and Heartache

Haydn’s “Gypsy Rondo,” the pathos of his F Minor Variations and Mozart’s tempestuous A Minor Sonata illustrate the composers’ many musical moods.

A Valentine’s Day program showcasing music of Chopin, Schumann, Liszt, Mendelssohn and Bartók, inspired by the composers’ significant others.

A lively program featuring the syncopated rhythms of Gershwin and Joplin, polkas by Stravinsky and Shostakovich and marches by Prokofiev and Sousa.

The Grammy Award-nominated guitarist’s international tours have taken him to celebrated musical centers including London’s Royal Albert Hall and Amsterdam’s Concertgebouw. He also has appeared with such prestigious ensembles as the Philadelphia Orchestra and the Boston Symphony.

First-prize winner in the 2018 Guitar Foundation of America International Competition, Feuillâtre has studied with Roland Dyens, Tristan Manoukian and Judicaël Perroy. His second recording will be released on the Naxos label in 2019.

Lutenist Barto is the first-prize winner of the 1984 International Lute Competition in Toronto, as well as a top prize-winner in the Musica Antiqua Competition in Bruges, Belgium. He has given solo recitals in the Festival of Flanders, London’s Purcell Room, the Utrecht Festival, and New York’s Music Before 1800 concert series. His program will feature music for both lute and vihuela.

First-prize winner of the Vietnam National Guitar Competition and the New Orleans International Guitar Festival Competition, Tran has appeared throughout North America and Asia as a soloist and chamber musician. Deeply connected to his native country, he is committed to bringing traditional Vietnamese music to the international concert stage.

Winner of the Bienen School’s inaugural Jean Gimbel Lane Prize in Piano Performance, Grammy Award-winning pianist Goode is also the recipient of the Young Concert Artists Award, First Prize in the Clara Haskil Competition and the Avery Fisher Prize. His recent performance highlights include a recital at the 92nd Street Y and a Mozart concerto with the New York Philharmonic and Manfred Honeck. He also has appeared as soloist with Louis Langrée and the Mostly Mozart Festival Orchestra.

Winner of the 1992 Naumburg International Piano Competition and recipient of an Avery Fisher Career Grant, Pratt has given numerous recitals throughout the U.S., including performances at Lincoln Center, the Kennedy Center, the Dorothy Chandler Pavilion in Los Angeles, Chicago’s Orchestra Hall and the New Jersey Performing Arts Center, as well as the White House. His many orchestral appearances include the New York Philharmonic, Minnesota Orchestra and the Pittsburgh, Atlanta, Baltimore, St. Louis, National, Detroit and New Jersey symphonies.

A silver medalist in the Seventh Van Cliburn International Competition, Bianconi has appeared with the orchestras of Cleveland, Los Angeles, Montreal and Chicago, as well as with James Conlon and the Orchestre de l’Opéra de Paris. His 2012 recording of Debussy’s Preludes received the Diapason d’Or, a nomination for Recording of the Year at the Victoires de la Musique Classique and the Grand Prix de l’Académie Charles Cros.

Haefliger has performed with such major orchestras as the New York Philharmonic, Los Angeles Philharmonic, Boston Symphony, the Chicago and San Francisco Symphony Orchestras, the Royal Concertgebouw and the London Symphony. Highlights of his 2018-2019 season include appearances with the Vienna Symphony Orchestra and the Tonhalle Orchestra Zürich, in addition to regular visits to London’s Wigmore Hall, where he performs the complete works of Beethoven alongside music of other composers in his Perspectives series.

Since gaining international recognition with his performance of Liszt’s first piano concerto at the Amsterdam Concertgebouw, Méndez has concertized extensively in his native Spain, the U.S., Italy, England, Portugal, Holland and Japan. As a chamber musician, he has collaborated with such artists as Karl Leister, Itzhak Perlman, Michael Tree, Pascual Martinez-Forteza and Pinchas Zukerman. Méndez is the newest member of the Bienen School of Music’s piano faculty.

The annual festival explores over two centuries of chamber music brilliance during the month of January. This season, the Aizuri Quartet, the American String Quartet and mezzo-soprano Stephanie Blythe make their Festival debuts.

Grammy Award-winning violinist James Ehnes has appeared with the Boston, Chicago, London, NHK and Vienna symphony orchestras, and in the 2018-2019 season, he made his debut with the London Philharmonic Orchestra at Lincoln Center. Pianist Andrew Armstrong has performed with such conductors as Peter Oundjian, Itzhak Perlman and Günther Herbig, and his chamber appearances include the American and Manhattan String Quartets, the Boston and Seattle Chamber Music Societies and the Jupiter Symphony Chamber Players. Over two special performances, the duo conclude their survey of the complete Beethoven violin sonatas.

Winner of the Grand Prize and the Concert Artists Guild Management Prize at the 2018 M-Prize Chamber Arts Competition, the Grammy-nominated Aizuri Quartet served as the 2017-2018 MetLiveArts String Quartet-in-Residence at the Metropolitan Museum of Art. The quartet has performed throughout North America and Europe, as well as Japan, Mexico, Chile, Costa Rica and Abu Dhabi. Their commissions and premieres include new works by Pulitzer Prize- winner Caroline Shaw, Lembit Beecher, Paul Wiancko, Gabriella Smith and Rene Orth, among others.

Recipient of a 2018 Borletti-Buitoni Trust Award and the prestigious Dutch Kersjes Prize, the Dudok Quartet Amsterdam returns following its U.S. debut at the 2018 Winter Chamber Music Festival. The quartet has appeared at major European venues and festivals including the Wiener Konzerthaus, Carinthian Summer Music Festival, Festival Quatuors à Bordeaux and the Amsterdam String Quartet Biennale, and has appeared regularly at the Amsterdam Concertgebouw and Muziekgebouw. Their most recent release on the Resonus Classics label, “Solitude,” features music of Mendelssohn, Weinberg and Shostakovich.

An evening with Bienen School of Music faculty and special guests from Chicago’s classical music scene.

Celebrating its 45th anniversary in 2019, the American String Quartet began its career winning both the Coleman Chamber Competition and the Naumburg Award in the same year. The group has served as resident quartet at the Aspen Music Festival since 1974 and at the Manhattan School of Music since 1984. Its 2018-2019 season featured collaborations with National Book Award-winning author Phil Klay and poet Tom Sleigh, as well as with author Salman Rushdie. Joining them is mezzo-soprano Stephanie Blythe, recipient of the 1999 Richard Tucker Award and the 2007 Opera News Award. Blythe has performed leading roles with the Metropolitan Opera, San Francisco Opera, Lyric Opera of Chicago, Seattle Opera, Royal Opera House Covent Garden and the Opéra National de Paris.

Subscriptions are offered at multiple levels for patrons purchasing three or more events in a concert series. (Due to high demand, for the Skyline Piano Artist Series, subscriptions are offered to patrons purchasing tickets to four or more events.) Subscribers save up to 30% off single-ticket prices and are guaranteed the same seats each season. Benefits also include free ticket exchanges and access to post-performance receptions with series artists. Subscribers to all of the concerts in a series receive 50% off the single-ticket price for any other Bienen School of Music concert subscription series. More information on subscriber benefits is available on the [email protected] website.