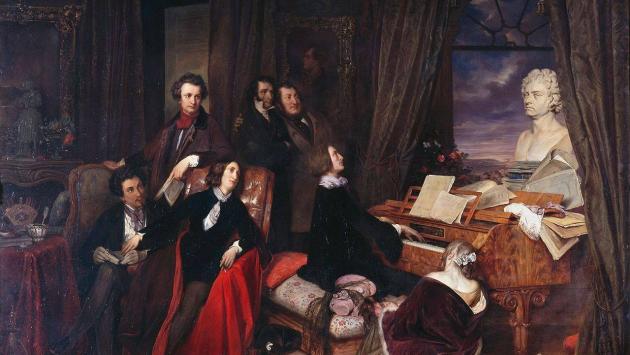 Commemorate Franz Liszt's 202nd birthday with an evening of Liszt's music as performed by some of Chicagoland's most celebrated concert pianists.

Tickets are available online at LisztChicago.tix.com or at the door.

George Radosavljevic studied at DePaul with Dmitri Paperno, and teaches in its community music division. He is orchestral pianist for the Lake Forest and Elgin symphony orchestras, and directs the RMU Chamber Ensemble.

Soviet-born Svetlana Belsky trained in Chicago with Emilio del Rosario, at Peabody with Ann Schein, and at the Manhattan School of Music with Nina Svetlanova, where she earned her doctorate. Currently Coordinator of Piano Studies at the University of Chicago, she is an active performer and recording artist, and has published an acclaimed translation of Grigori Kogan’s book Busoni the Pianist.

Co-founder of the Chicago/Midwest Chapter of the American Liszt Society, Alexander Djordjevic studied with Joel Shapiro, William Heiles and Gustavo Romero at the University of Illinois; as a Fulbright scholar, he worked with Vitaly Margulis at the Hochschule für Musik in Freiburg, Germany. A member of the MIC and College of DuPage faculties, he is an active soloist and chamber musician, whose Liszt recording Gray Clouds was awarded the 2010 Franz Liszt International Gran Prix du Disque by the Hungarian Liszt Society.

Brenda Huang studied at the New England Conservatory of Music and at Roosevelt University, working with Emilio del Rosario, Russell Sherman, Carolyn McCracken and Pawel Chechinski. A 1991 Gilmore Young Artist, she has performed frequently with orchestra and in recital. She is a faculty member of MIC.

Matthew Hagle earned his doctorate at Yale, and studied in London as a Fulbright scholar; his teachers include Maria Curcio Diamand, Robert Weirich, and Claude Frank. A faculty member of MIC, he is an active performer, appearing on WFMT, and in concert and recordings with Rachel Barton Pine, pianist Mio Isoda-Hagle, and many other outstanding artists.

Sung Hoon Mo teaches at MIC and the Wheaton Conservatory. He has performed widely in the Chicago area and abroad. A native Korean, he earned degrees at Eastman and Indiana University, and received his doctorate from Peabody; he studied with James Tocco and Ellen Mack.

Paul Sánchez, currently a Visiting Assistant Professor at the Wheaton Conservatory, earned his MM and DMA at Eastman, his BM at Texas Christian University, and as a Fulbright scholar, a degree in Spanish music at the Academia Frank Marshall. Founder and director of the Dakota Sky International Piano Festival, he has studied with Douglas Humpherys, Alicia Delarrocha, and Tamas Ungar.

14-year-old Andrew Guo is a winner of the Steinway Young Artist Competition and the Generation Next Young Composers Competition, and has performed at Grant Park, Ravinia, and on WFMT’s Introductions. A participant in the MIC’s Academy program, he studies piano with Alan Chow and composition with Matthew Hagle.

Claire Aebersold and Ralph Neiweem perform frequently as one of Chicago’s most respected piano duos. Both long-time members of the MIC faculty, and founders of the Chicago Duo-Piano Festival, they have been heard on WFMT, PBS, and the Summit record label. Between them, they hold degrees from Northwestern, Juilliard, and the New England School of Music.