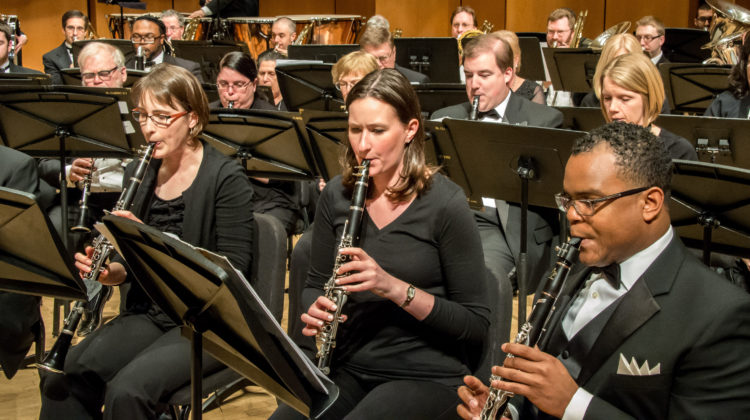 The Northshore Concert Band continues its 61st season with Giving Voice to the Silenced.

Highlights include a specially constructed and memorable “Remembrance Suite” that includes John Williams’ dramatic Theme from Schindler’s List, Jack Stamps’ Scenes from Terezin which is based on the poems of Ava Scholsova and Fronta Bas, both of whom died in the Auschwitz concentration camp, and Francis McBeths’ beautiful and intense Kaddish.

Also included is Lawrence Siegels’ Kaddish Suite which honors the survivors of the Holocaust and rejoices in their spirit. The Houston Examiner describes Kaddish Suite as a “Sweet, shocking, melancholy, uplifting, horrific, and finally, powerfully triumphant.”

The program also features two works by acclaimed American composer David Maslanka. One of his works, California, premiered February 13, 2016 by the California All-State Wind Symphony and was conducted by Northshore Concert Band Conductor and Artistic Director Dr. Mallory Thompson.  In his description of California Maslanka says, “Music lets us dream, and in that dream is the possibility of a new world, one in which humans live in harmony, within themselves, with all other people, with all other species, with the planet…our dreams start somewhere, let our music making be that place.”

Program highlights will include:

• A specially constructed “Remembrance Suite” including

Individual concert tickets are $20 each, seniors $15, students/children $10.
Tickets are available in advance or at the box office on the day of the concert.