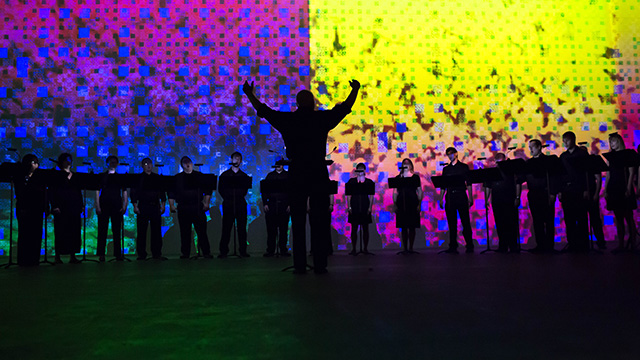 The Crossing will collaborate with conducting and composition students as well as choral ensembles and conclude their residency with a performance featuring the Bienen Contemporary/Early Vocal Ensemble (BCE).

In January, The Crossing won a Grammy Award for Best Choral Performance for their recording “Gavin Bryars: The Fifth Century.” The recording also features the PRISM Quartet (of which Bienen School associate professor of saxophone Taimur Sullivan is a member).

The Crossing’s Chicago area debut will be Friday, March 16 at 7:30 p.m. in Galvin Recital Hall, 70 Arts Circle Drive on the Evanston Campus.

The concert includes two commissioned works exploring poverty and inequality. “Anonymous Man” by Bang on a Can composer Michael Gordon describes disparate views of “home” in a neighborhood where some live on the street and some live in it. BCE joins The Crossing for a performance of Gabriel Jackson’s “Rigwreck,” a haunting meditation on power and money that is based on a poem by Pierre Joris.

“Bienen Contemporary/Early Vocal Ensemble has developed into a very rare university ensemble: fearless and yet vulnerable,” Nally said. “Thus, it is only natural that at some point, the Northwestern ensemble and the professional ensemble it is designed after, The Crossing, should come together and, for a moment, share the stage. So, here we are. That moment.

“Both works display the type of subtle social advocacy in music that BCE and The Crossing explore regularly,” Nally said. “We hope audiences will take the performance not as a virtuosic display, but as a deeply felt and genuinely offered meditation on the complex world in which we are living.”

The Crossing is a professional chamber choir conducted by Nally and dedicated to new music. Consistently recognized in critical reviews, the ensemble regularly collaborates with some of the nation’s most accomplished ensembles and creative composers. It is committed to working with creative teams to make and record new, substantial works for choir, most often addressing social issues. Since its founding in 2005, the ensemble has presented more than 60 commissioned world premieres by composers including Michael Gordon, Lansing McLoskey, John Luther Adams, Kile Smith, David Lang, Ted Hearne, Caroline Shaw, David T. Little, Robert Maggio, Gavin Bryars, Thomas Lloyd and Hans Thomalla.

The Crossing has 13 commercially released albums, including the 2018 Grammy Award-winning “Gavin Bryars: The Fifth Century.” Two more releases are planned for early 2018.

Conductor Nally is a recipient of the 2017 Michael Korn Award and the 2012 Louis Botto Award for Innovative Action and Entrepreneurial Zeal.

Tickets for the March 16 performance are $30 for the general public and $10 for students with a valid ID. They may be purchased at the Bienen School of Music box office, located in Pick-Staiger Concert Hall, 50 Arts Circle Drive; online at concertsatbienen.org; or by phone at 847-467-4000.