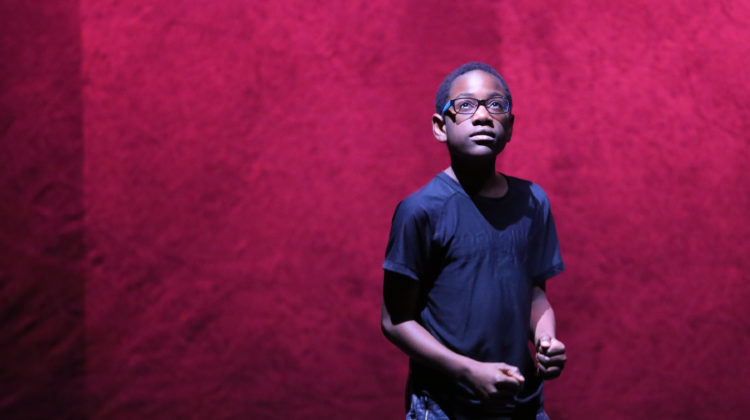 Mudlark Theater and Art of Evolution Theatre are co-producing a world premiere play, I.D., a show about racial and cultural identity in Evanston as told through the lens of a diverse group of young people.

I.D. is directed by Dru Smith (Mudlark Theater) and William Eason (Art of Evolution Theatre) as part of a year-long partnership funded by the Evanston Community Foundation. The production runs Nov. 9 – 12 at the Noyes Street Theatre, 927 Noyes St. in Evanston.

Tickets are $10 for students and $12 for adults, and can be purchased at www.mudlarktheater.org.

I.D. is a show about racial and cultural identity in Evanston— and it doesn’t pull any punches. Through a series of vignettes, the play examines both the burdens and privileges we’ve inherited and how that continues to shape our personal relationships and communities. With humor, heart, and hard honesty, I.D. challenges audiences to address their implicit biases with scenes about the segregation of school lunchrooms, the eight stage of achieving “wokeness,” and a child’s first jarring experience with racism.

The show features sixteen actors (ages 9-16) from Mudlark Theater and Art of Evolution Theatre who have been rehearsing together for the last eight weeks. Bringing two theater companies together is always an exciting challenge to tackle, and co-directors William Eason and Dru Smith were conscious about addressing this while also creating a show with sensitive subject matter.

“We made it a very safe space” notes Dru Smith who is also the Education Director of Mudlark Theater. “We made it clear that this a place where we’re going to explore our emotions, but we always have to be respectful, and listen to each other.”

“The collaboration with Mudlark has been truly an authentic partnership that is not just the two theatre companies working together, but incorporating the kids in a dialogue and working together to grow,” says William Eason, who is the founder and Artistic Director of Art of Evolution.

“We also did things to educate the cast,” adds Smith. “Like watching the documentary 13th which is about the thirteenth amendment which abolished slavery and explores the intersection of race, justice, and mass incarceration in the U.S. Some of the kids were unaware of the extent of what’s happening in America around race. So, we tried to immerse them in the subject matter and allow them the space and voice to talk about it.”

Both Eason and Smith hope that audiences will not only be challenged by what they see on stage, but take it as opportunity to talk openly.

“People are uncomfortable talking about race” says Eason matter-of-factly. “I hope audiences can appreciate that we are on that stage dealing with some really tough issues, but in a less threatening way, because it’s through the voice of children.”

“My advice is for audiences to open their mind and just experience the show” says Smith. “Let these kids work on your mind a little bit and your heart. We’ve got some quirky funny kids in this cast, and we tried to utilize that.”

This production would not be possible without the generous support of the Evanston Community Foundation (ECF). For more on ECF, visit www.evanstonforever.org.

Mudlark Theater’s Fall/Winter 2017-2018 Season is jam packed. Up next is Persistence: A Time-Traveling Western (November 16-19) written and directed by Will Quam, a remount of Mudlark’s adaptation of Don Quxiote (December 7-10, 14-17) adapted by Andrew Biliter and directed by Heather Currie, in the new year we have an adaptation of the Grimm fairy tale “The Twelve Dancing Princes” entitled Twelve (January 18-21) written and directed by Ali Shields, and also in 2018 is a new adaptation of Edith Nesbit’s The Enchanted Castle directed by Krista D’Agostino and Christina Lepri and written by Christina Lepri. For more information about upcoming Mudlark productions, visit www.mudlarktheater.org/shows.

Mudlark Theater is a not-for-profit organization where children are taken seriously as artists, and learn theater by making it.  As a rule, the general public expects little of children’s theater. Mudlark’s goal is to raise that expectation and keep it there. By holding children to a higher standard and empowering them to make strong artistic choices, we create the possibility for great theater—vibrant, funny, compelling shows that erase the boundary between youth and professional theater.

The Art of Evolution Theatre (AETC) is a not-for-profit organization that was created to provide a quality theater experience producing works that deal with the issues of religion/sprituallty, sexual orientation, gender, race, and age in a way that empoasses how we as a society have evolved on said topics.