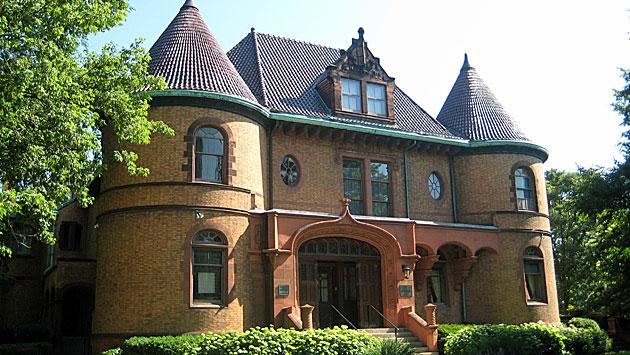 Intimate music by Baroque composer J. S. Bach, including a cantata about romantic love, will be performed by three prominent musicians in a historic Evanston lakefront mansion at the Sunday, Feb. 21, “Hauskonzert” (house concert) fundraiser for the Evanston-based Bach Week Festival.

The Hauskonzert will be held at the Charles G. Dawes House, 225 Greenwood St., Evanston. The late-19th-century National Historic Landmark was the home of U.S. Vice President Charles Gates Dawes and now houses the Evanston History Center.

The event starts at 5:30 p.m. with a cocktail reception and light hors d'oeuvres, followed by a 6 p.m. concert.

Steinhoff and Moy will play Bach's richly melodic Sonata for Viola da Gamba and Keyboard No. 3 in G Minor, BWV 1029, in which the two instruments seem to sing to each other.

Govertsen has sung at the Lyric Opera of Chicago opposite Renée Fleming and Anne Sophie von Otter. He appeared with the Chicago Symphony Orchestra under Esa-Pekka Salonen and as a soloist with the Grant Park Orchestra. He made his Carnegie Hall debut in 2011 with the Chicago Symphony conducted by Riccardo Muti. He has sung Bach cantatas with the Madison Bach Musicians and at the Santa Fe Chamber Music Festival. He made his Bach Week Festival debut in 2015.

Steinhoff is principal cellist of Chicago period-instrument orchestra Baroque Band and has performed with ensembles such as the Haymarket Opera Company, Newberry Consort, Second City Musick, Callipygian Players, Music of the Baroque, Chicago Opera Theater, and Madison Bach Musicians. She is a founding member of Wayward Sisters, which won first prize in the 2011 Early Music America competition.

Moy is principal keyboardist with the Bach Week Festival Orchestra and a frequent guest artist with Music of the Baroque, Newberry Consort, Baroque Band, and other ensembles. He has performed at the Boston Early Music Festival and York Early Music Festival in the United Kingdom. He is a member of the period instrument ensemble Trio Speranza and also serves on the faculty of the DePaul University School of Music, where he teaches harpsichord and directs the Baroque Ensemble.

Master of ceremonies will be Bach Week’s music director Richard Webster, who has led the festival since 1975 and performed in and helped organize the 1974 inaugural festival in Evanston. He is currently director of music and organist at Boston's historic Trinity Church on Copley Square.

Tickets to the event are $60 per-person general admission and are available online at www.bachweek.org. For additional information, phone the festival’s office at 847-269-9050.

All proceeds will benefit the 2016 spring festival, which will be its 43rd annual installment. Bach Week Festival concerts will be presented April 22 and 24 at Nichols Concert Hall in Evanston, and May 6 at Anderson Chapel at North Park University, Chicago. The festival is a collaboration between Bach Week and North Park’s School of Music.