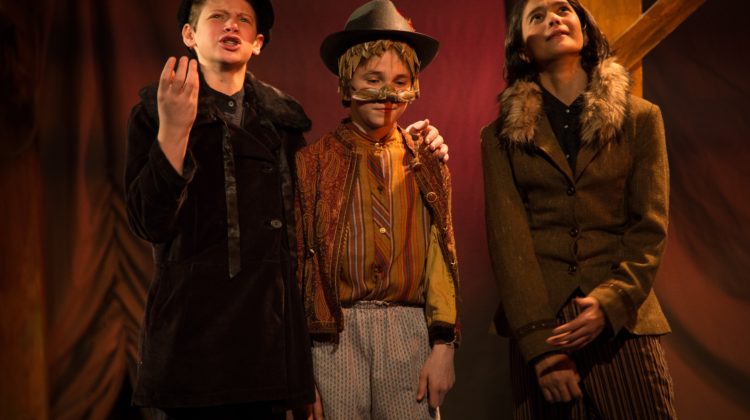 Mudlark Theater is pleased to announce its final production of 2016 Pioncchio based on the story by Carlo Collodi. Pinocchio was created and directed by Krista D’Agostino and Christina Lepri and written by Christina Lepri. Opening night is Thursday, Dec. 8, running Dec. 8-11, and continuing the following weekend of Dec. 15-18 at Noyes Street Theatre, 927 Noyes St., Evanston. Tickets are $10 for students and $12 for adults, and can be purchased at www.mudlarktheater.org.

Pinocchio opens in the seaside town of Livorno, Italy where Senior Geppetto is having a bad morning. But when a marionette he carves and christens Pinocchio comes to life, Livorno will never be the same. As Pinocchio stampedes his way through the town, followed by the mysterious Blue Fairy, he begins an adventure audiences won’t soon forget.

Pinocchio creators Lepri and D’Agostino have wanted to tackle this story for a long time. “Most people don’t know the original Collodi story” says Lepri “When we think of Pinocchio, we think of either the Disney musical cartoon or we just think of him as a cultural joke, a bad boy who’s nose grows when he lies. There’s so much more to the story than that.”

“Well for one thing, there’s no Jiminy Cricket,” adds Lepri. “It’s really the Blue Fairy who plays a much larger role in guiding Pinocchio on his journey. Krista and I were very excited about her part in the story and fleshing out her journey. We’ve taken the most liberties with her.”

“It’s also about our heritage,” adds D’Agostino. “Both Christina and I come from big Italian families, and we wanted to pay homage to that.”

In January 2017, Mudlark will premiere a new adaptation Hans Christian Anderson’s of The Snow Queen written by Andrew Biliter and directed by Biliter and Michael Miro. The Snow Queen runs January 20-22, 26-29. For more information about upcoming Mudlark shows, visit www.mudlarktheater.org/shows/.

Mudlark Theater is a not-for-profit organization where children are taken seriously as artists, and learn theater by making it.  As a rule, the general public expects little of children’s theater. Mudlark's goal is to raise that expectation and keep it there. By holding children to a higher standard and empowering them to make strong artistic choices, we create the possibility for great theater—vibrant, funny, compelling shows that erase the boundary between youth and professional theater.