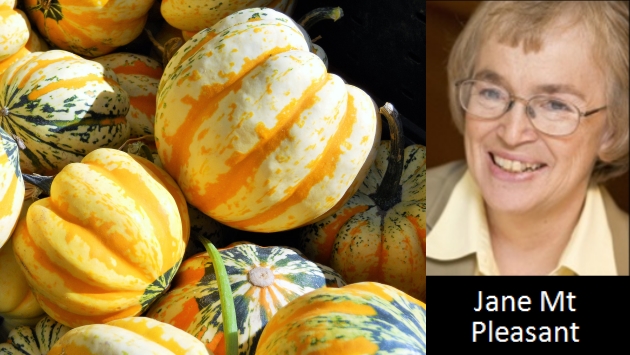 Jane Mt. Pleasant, a Cornell University professor and agronomist, will be the keynote speaker at the eight annual Dr. Carlos Montezuma Honorary Lecture & Awards at the Mitchell Museum of the American Indian.

The event, which honors members of the American Indian community who have raised awareness and contributed to the community in the same spirit as Dr. Montezuma, will be held on Friday, Nov. 10, at the museum, 3009 Central St. in Evanston.

The Awards Ceremony and lecture begins at 6:30 with a reception concluding the event at 8:00pm. The fee for the lecture is $12 for museum members / $15 for non-members. Tribal members are free.

Dr. Carlos Montezuma Honorary Award is given for a distinguished speaker whose contributions in social activism advanced Native peoples on a national scale.

Given this year to Mt. Pleasant, it recognizes the work of Dr. Montezuma, a Chicago physician and Native American activist who was one of the founding members of the Society of American Indians and ardent advocate for the voting rights for Native peoples.

Mt. Pleasant, associate professor in the Horticulture Section of School of Integrative Plant Science at Cornell University, studies indigenous cropping systems and their productivity. Using her expertise in agricultural science, she examines agriculture from a multidisciplinary perspective that includes history, archeology, paleo botany, and cultural/social anthropology.

Most of her work is focused on Haudenosaunee agriculture in the 16 through 18th centuries, although more recently she has expanded her research to include pre-Columbian agriculture in eastern and central North America. She received her BS and MS from Cornell University and her PhD (in soil science) from North Carolina State University.

Indigenous farmers in pre-Columbian and colonial North America have frequently been characterized as shifting cultivators whose agricultural productivity was marginal and unstable. Data from field experiments and the historical and ethnographic literature provide a much different assessment. Haudenosaunee (Iroquois) farmers practiced conservation tillage centuries before Euro-American cultivators had heard the term; they were among the world’s most sustainable and productive farmers.

The Elizabeth Seabury Mitchell Award is given for exemplary service and philanthropic giving in promoting American Indian culture. Mrs. Mitchell gave generously to many native organizations throughout her life, including co-founding the Mitchell Museum of the American Indian.

The 2017 recipient of her namesake award is Ann Terry Straus. Straus is author and editor of many works including Native Chicago and Visions and Voices: American Indian Activism and the Civil Rights Movement. Straus taught at the University of Chicago after serving as faculty and Dean of the Chicago campus of Native American Educational Services.

The Woodrow “Woody” Crumbo Award is given in for exceptional contributions in the development and preservation of American Indian art. Woody Crumbo spent six decades of the mid-20th century promoting Native American art. He participated in hundreds of exhibits, painted murals inside the US Department of Interior, and had hundreds of his pieces acquired by museums like the Metropolitan Museum of Art and the Smithsonian.

The 2017 recipient is artist Doug Hyde (Nez Perce, Assiniboine, & Chippewa). Hyde is a world-renowned artist who’s bronze and stone sculptures are displayed at museums throughout the world and have won numerous awards. Most recently, Hyde won the James Earle Fraser Sculpture Award at the 2016 and 2015 Prix de West. In 2017 he worked on the emblem of the USS Colorado, a newly commissioned submarine.

The Mitchell Museum is one of only a handful of museums in the country that focuses exclusively on the art, history and culture of American Indian and First Nation peoples throughout the United States and Canada. The Mitchell Museum earned the Illinois Association of Museum’s 2017 Superior Award for the exhibit “Contemporary Native Women Opening Doors to Change” which features Mt. Pleasant as one of 12 women highlighted in the exhibit. The exhibit is on view until the end of December.