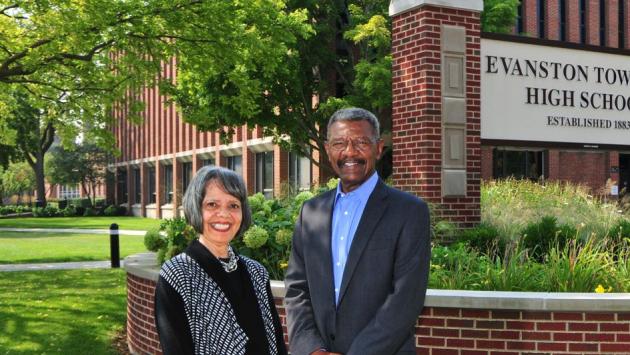 A couple dedicated to empowering youth throughout Evanston and an unusual police partnership will be honored at the Evanston MashUp Sept. 9 on the Northwestern University lakefront.

The Evanston MashUp is an annual networking event hosted by Northwestern University in coordination with the City of Evanston, the Evanston Chamber of Commerce and other business partners.

Northwestern University President Morton Schapiro said the police collaboration "has existed for many years" and it "benefits the entire community and exemplifies the strong partnership between Northwestern and Evanston."

The Spirit of Evanston Award is presented to an Evanstonian who has performed outstanding service to the community and who embodies the mix of qualities that represent the city: courage, compassion, vision and creativity.

Bob and Patty Reece are being honored for a tireless commitment to improving the lives of young people in the city. Bob, who moved to Evanston as a five year old, and Patty, who was born in Evanston, have dedicated themselves to working with youth and youth-centered organizations throughout the community.

“Once you start giving to and spending time with youth organizations, it is easy to stay involved and keep on giving,” Bob said. “We see that it’s making a difference in the lives of the kids we work with.”

Patty added: “We are deeply honored and very humbled to be acknowledged for something that we do for the love of Evanston and the people who make it the special place that it is.”

A graduate of Evanston Township High School and Loyola University, Bob owns Reece Insurance and Financial Services Co. in Evanston and spent much of his career in sales for Fortune 50 companies prior to starting his own company.

He was the first African American to serve as president of the Board of Directors of the McGaw YMCA, was co-chair of the McGaw YMCA 125th anniversary celebration and also co-chaired “Unforgettable,” a celebration of Evanston’s Emerson Street YMCA, which served the African-American community from 1909 to 1969.

Bob has been involved with the Fellowship of Afro-American Men (FAAM) youth basketball league for nearly 40 years, the Chessman Club that provides service to the youth and elderly and also works with the Evanston Community Foundation.

A retired School District 65 teacher — she worked for 34 years and retired from what is now Bessie Rhodes Elementary School — Patty serves on the board of the Evanston Community Foundation and has coordinated an essay contest at FAAM for more than 20 years and continues to do so today.

Almost 25 years ago, Patty also was a founding member, along with Bob who now serves as president, of the Warren “Billy” Cherry Scholarship Fund in honor of Patty’s late brother, an educator and principal in Evanston. Scholarships are given to those interested in pursuing a career in education or youth work. Patty is a graduate of ETHS and has a bachelor’s degree from Roosevelt University and a master’s degree from National Louis University.

Previous winners of the Spirit of Evanston Award include Dick Peach of Dempster Auto Rebuilders and Susan Trieschmann of Curt’s Café.

The Catalyst Award recognizes a person or organization that embodies the spirit of community partnership and collaboration.

At a time when there is a national spotlight on police departments across the country, the partnership between the City of Evanston and Northwestern University police departments demonstrates that, by working together, they can make a difference in the community.

“We view each other as equal partners in our commitment to solving problems and serving as a caretaker in the community,” said Evanston Police Chief Richard Eddington. “There is mutual respect and we work very well together. This award is a recognition of that.”

Evanston is the only Big 10 city that has co-jurisdiction with the university’s police department. Chief Eddington said that the formal arrangement between the city and Northwestern University has been in place for at least 20 years. Chief Lewis has a staff of more than 80 people and Chief Eddington has more than 225 sworn and civilian staff.

Past winners of the Catalyst Award include three professors at Northwestern University who founded a company in Evanston that had a significant impact on the city.

The sixth annual Evanston MashUp kicks off at 5:30 p.m. on Wednesday, Sept. 9. The event is an opportunity for entrepreneurs, executives, artists, professionals, city leaders and CEOs to gather to celebrate the contributions of those in the Evanston community.

In addition to the awards ceremony, there will also be a “taste of Evanston” featuring local restaurants, music, dancing and entertainment. Join the celebration and enjoy a late summer evening in a beachfront tent with amazing food, great music, and the eclectic and electric essence of our community. All proceeds benefit the Evanston Chamber of Commerce, promoting and growing business in the community.