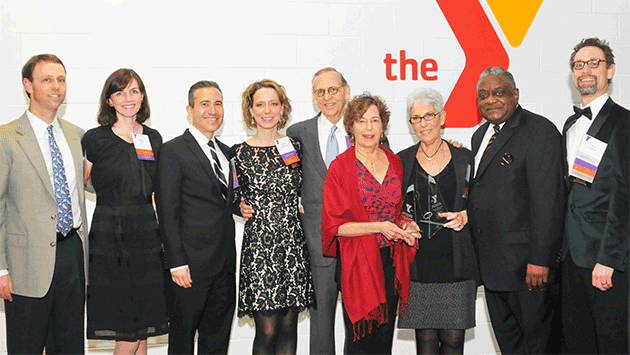 “We are honored and encouraged by the overflow of support evidenced at our 2015 Youth Gala,” said Dan Israelite, McGaw Y board chairman.

The annual gala raises funds that benefit hundreds of children by allowing equal access to McGaw programs such as travel basketball, Y Achievers college readiness, Project SOAR mentoring, camp, MetaMedia, and so much more. Bidding competition at the Gala was fierce for a weekend getaway to a downtown Chicago condo, complete with free parking and a private tour from the Architecture Foundation, as was a trip to New York City.

“I grew up in the Y,” said Alderman Peter Braithwaite, who represents Evanston’s 2nd Ward. “McGaw is like a hub for every stage in a child’s life.”

From early childhood education to college readiness, McGaw YMCA offers children the opportunity to explore their interests and prepare for their futures. Before Saturday’s Gala, some guests received a sneak peak at McGaw YMCA’s new MetaMedia Youth Center. MetaMedia will provide middle school students with innovative, youth-driven ways to explore advanced technology, music and video production, and creative design. The official MetaMedia Grand Opening will be held in March.

“MetaMedia is an exciting example of the McGaw YMCA’s ability to be responsive to young people as their needs and interests change, and the MetaMedia reception added a distinct new energy to the Gala,” said Charles A. Lewis, Chairman of the Lewis-Sebring Family Foundation. The Lewis-Sebring Family Foundation provided significant financial support to bring the vision of MetaMedia into reality.