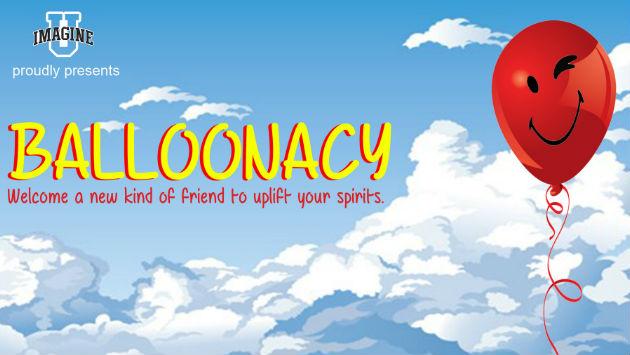 A sweet and uplifting dialogue-free play for the very young, packed with physical comedy, will soon appear on Northwestern University’s Imagine U stage.

Recommended for audiences ages 2 years and older, “Balloonacy” is a 45-minute mime show written by Barry Kornhauser, an award-winning playwright, director and educator, who has been recognized for his many contributions to the cultural enrichment of children.

Now in its 5th year, the School of Communication’s Imagine U productions are geared toward children and their families. Performances often include an opportunity for young audience members to interact with the cast after the show.

Northwestern’s Imagine U production will be directed by Chicago-based freelance theatre director and School of Communication alumna Kathryn Walsh, program mentor at the School’s Master of Fine Arts in Directing program. Walsh received her MFA in directing from Northwestern in 2011, where she studied with faculty members Anna D. Shapiro, Jessica Thebus, Mary Zimmerman and Michael Rohd.

“Balloonacy” tells the tale of a lonely old man who discovers an unlikely friendship that floats into his life unexpectedly through the window: a bright red balloon. Set in his solitary ways, he begrudgingly encounters the friendly balloon that seems intent on becoming his friend.

Packed with physical comedy, the award-winning play shows how with a little imagination and acceptance, companionship can come from the most unlikely places.

“Since there is no spoken dialogue, toddlers will find the live sound and the idea of a balloon friend that can be your playmate the most appealing,” Walsh said. “We will create a world where simple things spark imagination, and where joy and connection can be found in the act of play. That should appeal to all ages.”

Tickets are $10 for general public and $5 exclusively for full-time Northwestern students on advance purchase or for children ages 18 and under.