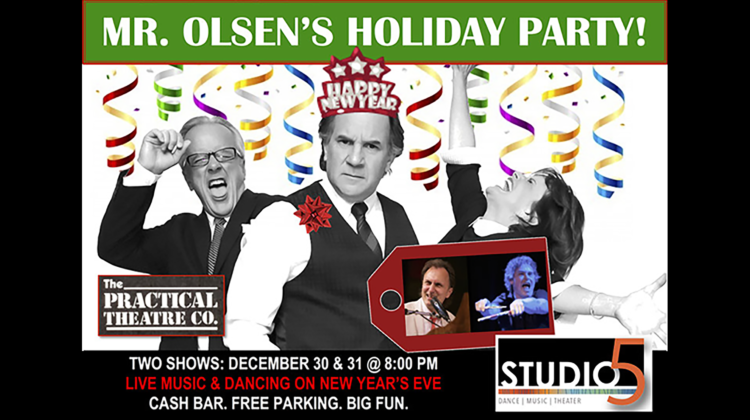 The Vic and Paul and Dana Show Presents a Holiday Extravaganza!

Grown-up comedy! Adult beverages! Live music! The Mr. Olsen Dancers! Maybe even snow! Ring in the new year with a raucous good time at Studio5. From the legendary Practical Theatre Company, improvisational comedy veterans Victoria Zielinski, Paul Barrosse and Dana Olsen reunite in a sketch comedy/variety show that will swing you into 2017. Joining the cast will be the Practical Theatre's longtime musical director, Steve Rashid, with Rockin' Ronny Crawford on the skins and Don Stiernberg on every stringed instrument imaginable. As if that wasn't enough, the next generation will also be representing, yo, adding comedy by stand-up artist Emilia Barrosse and Giggle Break's own Daniel Rashid, along with music by the incredible Eva B. Ross with drummer, Robert Rashid. And did I mention the Mr. Olsen Dancers?? Oh, it's a family affair, alright, and this New Year's, everyone is family!

There will be shows two nights:

December 31st: The comedy/variety show (including light food) followed by live music by the Studio5 All-Stars as we open up the dance floor and boogie into the New Year!

Studio5 is Evanston's new, hip, intimate performing arts venue, featuring comfortable seating, excellent sight lines, state of the art sound and lighting, and acres of free parking. We will have a cash bar for both evenings.