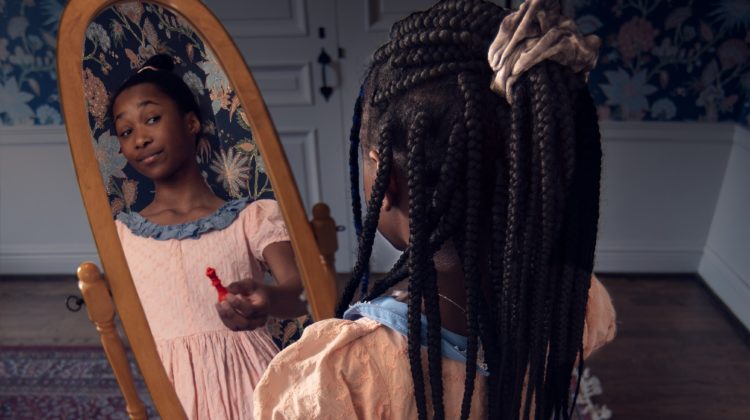 Mudlark Theater kicks off their spring season with Through the Looking Glass adapted by Mudlark’s Artistic Director Andrew Biliter and directed by Christina Lepri. The show runs from March 8 – 23 at the Noyes Street Theater in the Noyes Cultural Arts Center in Evanston. Performances are at 7pm on Fridays & Saturdays, and 3pm on Sundays. Tickets are $11 for students and $14 for adults and can be purchased at www.mudlarktheater.org/tickets.

In Through the Looking Glass, Alice stumbles again into a magical world… but it isn’t Wonderland. Instead she finds herself on a gigantic chessboard, with a host of absurd new players including Humpty Dumpty, Tweedledee & Tweedledum, and the formidable Red Queen. And if Alice can play her way safely to the other side, she might just become a queen. Join Mudlark as we journey into this delightfully madcap tale of self-discovery, absurdity, and pretend.

While Alice in Wonderland is certainly the better known of Lewis Carroll’s works, Through the Looking Glass is second to none in its ability to delight patrons of all ages.

“We have all been Alice,” says playwright Andrew Biliter. “Every kid has struggled with a confusing idea. Every adult has felt irritated by nonsensical rules. We’re all on a journey to make sense of the world around us and that can be exhausting. It’s a relief and tremendous fun to abandon sense, and to see our simplest conventions, like language and manners, turned on their heads.”

This is Mudlark’s second production of Biliter’s adaptation of Through the Looking Glass which first premiered in 2013. The new cast and creative team have been working since the fall to bring this dynamic script to life.

“There’s so much room to play in this story,” says director Christina Lepri. “When you’re creating a fantastical world on stage, actors and designers really get a chance to stretch their creative wings. We’re incorporating film, dance, and puppetry into the production to help capture the ever-shifting world of Looking Glass Land.”