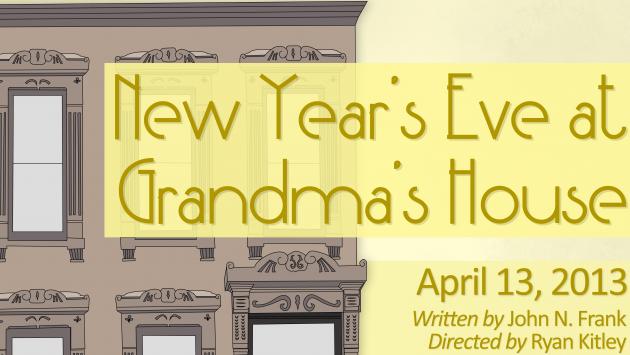 A new play and a new theater company are about to be born in Evanston on April 13 when the city's newly formed Evanston 2nd Act Players stage an original one-act play, “New Year's Eve at Grandma's House,” the story of an Italian-American family preparing to welcome in the turbulent 1960s.

The play is an original work by author and long-time Evanston resident John N. Frank. Frank and his wife, Carolyn Calzavara, formed the theater company after taking acting classes at the Actors Training Center in Wilmette and the Piven Theatre in Evanston where they met most of the actors who comprise the company. Veteran film and stage actor and teacher, Ryan Kitley <http://www.ryankitley.com/index.html> teaches/directs the play.

“The story of New Year's Eve at Grandma's House is one I've been waiting to tell for more than 50 years,” says Frank, who has more than 35 years experience as a business journalist, editor, speaker and author. “I'll be playing one of my uncles. I considered playing my own father but found that a bit more of an acting challenge than I was prepared for,” Frank jokes.

New Year’s Eve at Grandma’s House is the story of an Italian-American family with all its drama, laughter, joy and tears, at the start of the 1960s. The story is a personal one for Frank, based on his mother's side of his extended Italian family. But while it started as a personal tale, Frank hopes audience members all will see the parallels with their own families, really with all American immigrant families, for all Americans are immigrants of one sort or another at their core.

Evanston 2nd Act Players emerged from a group of actors brought together by their love of theater and the telling of simple stories that touch everyone's lives.  The core of the multi-generational troupe is comprised of experienced and fledgling film and stage actors, including April Cowgur, Chris Johnson, Rinat Urman, Colleen McDermott, Loren Seidner, Patrick Thornton, Melissa Mok, and introducing ETHS junior Natalie Jacobson as Julianna. Claire Shavzin is stage manager for the production.

The original play went to workshop in late 2012 and again in early 2013 to prepare it for the production you will see April 13. For more, see the play's website:
<newyearseveatgrandmas.wordpress.com>

The 2nd Act Players will stage two performances April 13, at 6 p.m. and 8 p.m., at the Piven Theatre, 927 Noyes, Evanston (Piven is not involved in this production). Tickets, which cost $10 for either open seating performance, are available through the show's website: http://newyearseveatgrandmas.wordpress.com, or via e-mail to [email protected]; simply specify number of tickets and performance time desired.

About the Playwright
John N. Frank is a native New Yorker who has spent most of his adult life in Evanston, Frank grew up with a love of the theater fostered by his parents. Evanston became the perfect place for him to nurture that love, given the  rich theater and performance history here.

In 2012, Frank  published his first book, “Always Be Job Hunting,” an autobiographical account of how to stay employed in today's ferocious job market.

About the Play
New Year's Eve at Grandma's House is inspired by parties that took place every New Year's Eve at playwright John Frank's grandmother's house in the Park Slope section of Brooklyn.

Park Slope in 1960 wasn't the trendy urban oasis for young families it is today. Rather it was a typical New York melting pot neighborhood where established Irish families were looking wearily at the Italians who were moving up from below Fifth Avenue while the Italians themselves were looking over their shoulders at the influx of Puerto Rican immigrants staking out their pieces of the American dream.

Characters in the play are based on Frank's aunts, uncles, parents and, of course, his grandmother. Some characters have the same names as real-life people, but all have morphed a bit into characters to aid in our story telling.

At those parties, the children were normally in the living room watching television while the adults sat in the dining room and regaled each other with familiar stories. Luckily, Frank often went into that wonderful room to hear those stories.