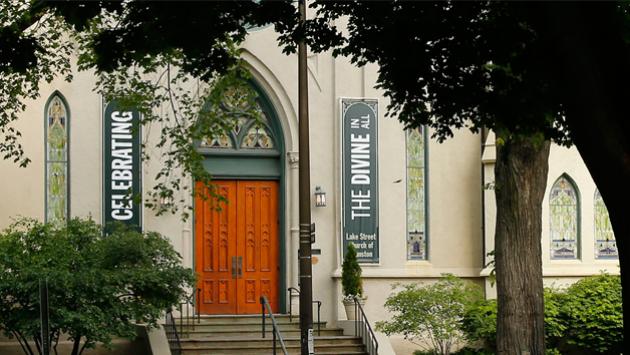 At a time of “horrific loss of life” in Gaza in the Israeli-Palestine conflict, and escalating barbarism and hostilities around the world, three local religious leaders from different traditions with gather to speak from their faith traditions and in support of justice and unity.

The annual World Community Service at Lake Street Church, 607 Lake St. in Evanston, will be held on Sunday Oct. 5 at 10:30 a.m.

Rev. Steve Van Kuiken welcomes Imam Abdul Malik Mujahid, Chair of the Council for a Parliament of the World Religions, and Rabbi Brant Rosen, of the Jewish Reconstructionist Congregation in Evanston in co-leading an interfaith service exploring these issues.

Longtime peace activist Rabbi Rosen, identified by the JRC as its “spiritual leader since 1998,” recently resigned from the liberal congregation over controversy associated with his personal outspokenness in solidarity with the people of Palestine and blog posts critical of Israeli policy, which inspired some and angered others. He continues to serve until a successor is in place. He is a past president of the Reconstructionist Rabbinical Association and is the co-chairman of the Jewish Voice for Peace Rabbinical Council.

“We cannot help but speak out in response to the horrific loss of life currently taking place in Gaza, at the hands of the Israeli military. We deplore the Israeli government’s military crackdown in the West Bank that led to its lethal, military onslaught on the people of Gaza.  We mourn the deaths of hundreds of innocent people, including children,” Rabbi Rosen notes in one of his posts this past July.

Imam Abdul Malik Mujahid, who spoke on “Sharia and Jihad: Threat or Misunderstanding” in 2012 at Lake Street, is a leader of United Power for Action and Justice, a coalition of 60 churches, synagogues, mosques and labor organizations.  His Sound Vision Foundation is a leading producer of educational content on Islam and Muslims.

“We normally do a broader celebration of world faith traditions, but in the midst of accelerating violence in Gaza, we saw the opportunity to explore the religious roots of these issues. I see the goal of faith as awareness of the Divine and our essential unity, and the role of religious leaders and teachers to challenge their congregations in this regard and call for social justice, transformation and compassion,” says Rev. Van Kuiken.

Rev. Van Kuiken, a social justice pioneer who believes in the power of spiritual communities to impact change in the world, was enthusiastically welcomed by the Lake Street Church as its senior minister in January 2013. Van Kuiken, the first clergy to face disciplinary action by the Presbyterian Church for marrying same-sex couples, was in the local and national news while serving as pastor of the progressive Mount Auburn Presbyterian Church in Cincinnati from 1999 to 2002, having been recruited by the congregation, in part, to challenge church doctrine that forbade same-gender marriage.

“My congregation and I engaged in ecclesiastical disobedience, following in the tradition of Martin Luther King, to disobey unjust laws. We saw these as unjust laws of the denomination. When you engage in civil disobedience, you have to engage openly, lovingly and willing to accept the penalty. The purpose of civil disobedience is to raise the consciousness of the larger community.”

Formally accused of heresy, Steve was removed from office or “defrocked.” He was ultimately reinstated, but left the Presbyterian Church and was one of the religious leaders included in a 2004 CNN documentary, Fight Over Faith, reported by Carol Marin and produced by Don Moseley.

In June of 2014, The Presbyterian Church voted to reverse its longstanding position opposing the marriage of same sex couples.

Led by elected lay co-directors, Lake Street Church is a vibrant community of independent thinkers and learners with wide interests. Members create and offer an array of intriguing programs, study groups and events on such topics as meditation, mysticism, creation stories, why evil exists, Buddhist teachings, dreams, music, Dances of Universal Peace, gender-based affinity meetings, and outside speakers, such as the Medium for the Oracle of the State of Tibet.