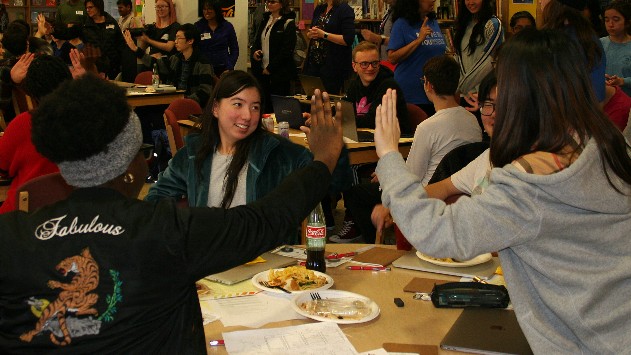 Roycemore School in Evanston last Friday hosted the first Creative Jam in Illinois for high school students — a tournament-style event that challenges students to prototype a software design solution for a real-world problem.

Creative Jams were developed by the software company Adobe as a way to bring creative professionals together for a competition that lets designers showcase their skills. The events have been expanded to university campuses and now are being rolled out to high schools.

City of Evanston Sustainability Officer Kumar Jensen presented the challenge — to prototype a digital app that informs, motivates and rewards the citizens to help the city achieve zero waste status.

Adobe trainer Taylor Kobey provided an introduction to the features of the Adobe XD software students would be using.

With only two hours to produce a prototype that would face the critical eye of a judging panel made up of industry experts, the pressure was on for the students.

Working through lunch and getting help from mentors supplied by Northwestern University’s Medill School of Journalism, the Roycemore high school students collaborated with their teammates and exercised their skill sets which included design thinking, creative problem solving and digital literacy.

When the allotted time was up, eight teams had designed eight different prototypes ready to be presented.

The winning prototype, Trackcyle, is designed to let users collect points redeemable at local merchants when they recycle material at centers equipped with scanner technology.