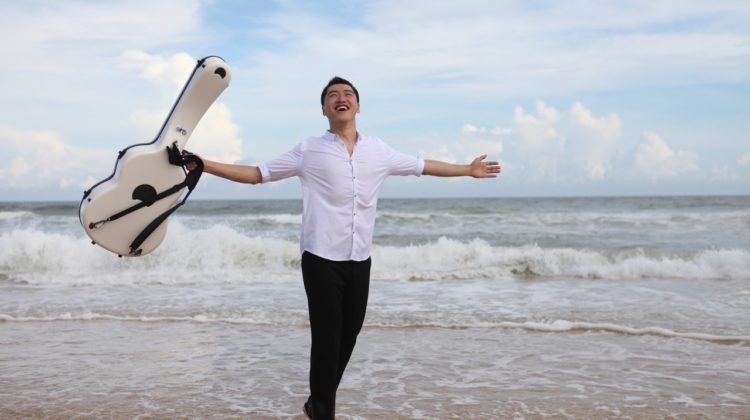 Northwestern University’s Henry and Leigh Bienen School of Music opens the 2018-2019 Segovia Classical Guitar Series on Oct. 13 with the Chicago debut of Tengyue Zhang, winner of the 2017 Guitar Foundation of America Competition.

The five-concert series also features internationally renowned guitarists Berta Rojas and Judicaël Perroy; the return of the Waller and Maxwell Guitar Duo; and a concert by acclaimed lutenists Ronn McFarlane and Paul O’Dette.

All performances begin at 7:30 p.m. in the Mary B. Galvin Recital Hall located in the Patrick G. and Shirley W. Ryan Center for the Musical Arts, 70 Arts Circle Drive on the Evanston campus.

Artistic director Anne Waller, Bienen senior lecturer in music performance, founded the series to coincide with the 100th anniversary of the birth of legendary Spanish guitarist Andrés Segovia. The series showcases established and emerging artists from around the world, who bring their teaching skills and performance artistry to Northwestern and Chicago-area audiences.

Renowned for the elegance of her playing, three-time Latin Grammy nominee Rojas returns to Bienen after her 2011 Segovia concert. Rojas has performed at celebrated venues worldwide, including Carnegie Hall’s Weill Recital Hall, Lincoln Center’s Frederick P. Rose Hall, the Kennedy Center, London’s South Bank Centre and Dublin’s National Concert Hall. Taking her audiences on a colorful journey of sound, Rojas embraces new works by composers in diverse genres. An ambassador for the music of her home country of Paraguay and Latin American music as a whole, she was named a Fellow of the Americas by the Kennedy Center and awarded the National Order of Merit of the Comuneros, Paraguay’s highest honor.

As the Waller and Maxwell Guitar Duo, Bienen School faculty guitarist Waller and DePaul University faculty guitarist Maxwell have appeared at the Phillips Collection in Washington, D.C.; Guitar Foundation of America festivals; Buffalo, New York’s Rantucci Festival; and Dame Myra Hess Memorial Concerts in Chicago. They have performed extensively in Italy, where they were praised by La Sicilia for “their absolutely sublime touch” and by Libert for “strong playing, but at the same time delicate and clean.” Chicago Symphony Orchestra (CSO) assistant principal flutist Graef and Pikler, longtime CSO principal viola, join the duo for an evening of exquisite chamber music.

Lutenist O’Dette, winner of a Grammy Award and the Diapason d’Or, has performed at major international festivals throughout the U.S., Europe and Australia. He has appeared with respected conductors and ensembles including Jordi Savall, Gustav Leonhardt, Tafelmusik, the Parley of Instruments and Tragicomedia, and he has recorded for the Harmonia Mundi, Philips, Decca, Sony and Hyperion labels, among others. Grammy-nominated lutenist McFarlane is a founding member of Ayreheart and the Baltimore Consort. He has toured throughout the U.S. and Europe, including appearances with Apollo’s Fire, the Bach Sinfonia, Houston Grand Opera, the Oregon Symphony and the Portland and Indianapolis Baroque Orchestras. Together, O’Dette and McFarlane present a rare duo lute performance not to be missed, featuring music of Dalza, da Milano, Galilei, Merulo, Piccinini, Dowland, Danyel and Johnson.

Described by the San Antonio Express News as “Incandescent… intense, driven and jaw-droppingly brilliant,” Perroy has garnered worldwide acclaim as a virtuoso guitarist since capturing first prize at the 15th Guitar Foundation of America International Competition. He is the winner of five Diapason d’Or awards and top prizes at the Ile-de-France, René Bartoli and Bourg-Madame competitions. Highly sought after as a teacher, Perroy has coached students who went on to win regional, national and international competitions including the Guitar Foundation of America. His latest album, “Paris une solitude peuplée,” was released in 2017 and features works by Villa-Lobos, Ponce, Takemitsu, Sor and Scriabin.

Tickets are $30 for the general public and $10 for students with a valid ID, and are available online at concertsatbienen.org, by phone at 847-467-4000 or by visiting the box office located in Pick-Staiger Concert Hall, 50 Arts Circle Drive.

Segovia Classical Guitar Series subscriptions also are available and include a variety of benefits. For more information, call the Bienen School of Music Ticket Office at 847-467-4000 or visit concertsatbienen.org.

The Bienen School is a member of the Northwestern Arts Circle, which brings together film, humanities, literary arts, music, theater, dance and visual arts.