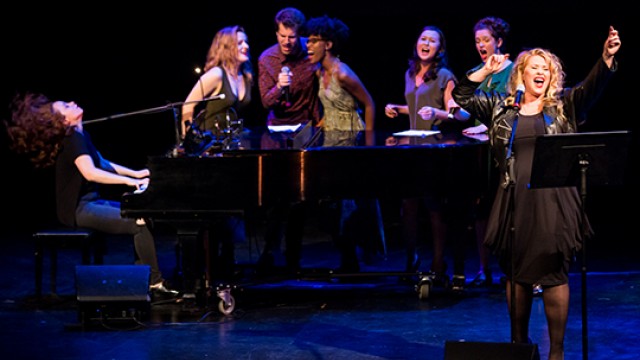 Each year the Johnny Mercer Songwriters Project, in collaboration with AMTP at Northwestern, hosts the nation’s most promising emerging songwriters in music theatre, country, R&B, rock and contemporary pop music, and continues the legacy of legendary songwriter Johnny Mercer.

This year, a record 170 applicants from 25 states and five countries applied for the prestigious free-of-charge program, which has been a catalyst to the careers of many artists. Among them are Tony, Oscar, Grammy and Golden Globe Award winners Benj Pasek and Justin Paul (“LaLa Land,” “Dear Evan Hansen”); Fred Ebb Award-winning duos Sam Willmott and Shaina Taub and Michael Kooman and Christopher Dimond; Jonathan Larson Award winner Nikko Benson; and Latin Grammy Award winners Obed Bermudez and singer/actress Jennifer Peña. This year’s selected songwriters will be announced at the end of April.

The project culminates with “Songwriters in Concert,” a one-night-only concert event of songs worked on during the week-long intensive. This year’s concert will take place on Saturday, June 30 at 8 p.m. in the Ethel M. Barber Theater on Northwestern’s Evanston campus.

Box office hours are Tuesdays through Fridays, 10 a.m. to 5 p.m. and Saturdays, noon to 4 p.m. For more information visit the Wirtz Center website.

Grammy-nominated songwriter Shelly Peiken has been a prolific, behind-the-scenes force in the music business for more than two decades. Her songs have sold in excess of 50 million records. She is best known for penning culturally resonant, female-empowerment anthems such as Christina Aguilera’s Billboard number-one single, “What a Girl Wants” and Meredith Brooks’ Grammy-nominated hit, “Bitch.” Peiken’s experiences give her a unique perspective on the music business. She is a professional woman who fought her way into a highly competitive and changing industry and found a way to succeed, balancing a thriving career and a family. Peiken’s book, “Confessions of a Serial Songwriter,” is a humorous pop culture memoir about her journey from young girl falling under the spell of magical songs to working professional, writing hits of her own. Peiken discusses the creative process, the conflicts that arise between motherhood and career success, the challenges of staying relevant, celebrity egos and schemers but, most of all, the remarkable people she’s found along the way. The audio version of “Confessions of a Serial Songwriter” has been nominated for a 2018 Grammy Award for Best Spoken Word Album. Based in Los Angeles, Peiken blogs for Huffington Post about songwriting culture and is a fierce advocate of creators’ rights on Capitol Hill.

The mission of the Johnny Mercer Foundation (JMF) is to support the discipline of songwriting in the tradition of the Great American Songbook as exemplified by the life and work of the legendary Johnny Mercer: lyricist, composer, performer, collaborator and producer.  The Foundation continues Johnny’s legacy by partnering with individuals and organizations dedicated to celebrating and nourishing the disciplines he mastered and the causes he and his wife Ginger Mercer championed.

The legendary Johnny Mercer (1900-1976) composed more than 1,400 songs, including “Accentuate the Positive,” “Fools Rush In (Where Angels Fear to Tread”), “Any Place to Hang My Hat Is Home,” “Too Marvelous for Words” and “Come Rain or Come Shine.” He also wrote songs for 100 motion pictures and won four “Best Song” Academy Awards. A top radio personality and recording artist, he also was the co-founder and president of Capitol Records and established the Songwriters Hall of Fame with Abe Olman and Howie Richmond.