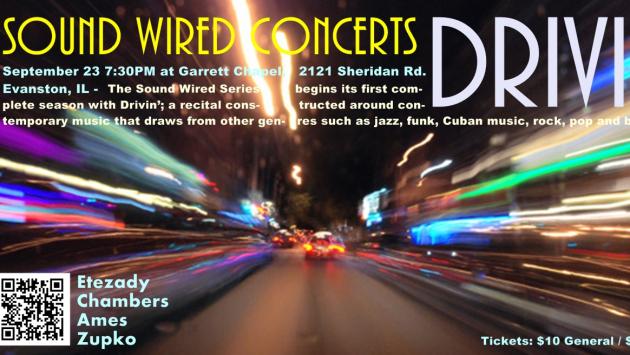 The Sound Wired Series begins its first complete season with Drivin’; a recital constructed around contemporary music that draws from other genres such as jazz, funk, Cuban music, rock, pop and blue-grass.

The title of this recital is derived from Evan Chambers’ piece Come Down Heavy. This piece is based on four folk songs including “Steel Drivin’ Man”, a movement that begins with a gritty, blues-inspired saxophone solo that evolves into chaos. The other three movements are equally emotionally driven, including the beautifully tender “Gave My Love a Cherry”, and “Oh, Lovely Appearance of Death”.

Nightlife is driven by the juxtaposition of structure and free improvisation. Like walking through New York or Chicago on a late Friday night, one can turn a corner to enter the craziness of a popular shopping district, or turn down a dark street where music can be heard seeping out the back alley door of an underground nightclub.

Google the term “Hold ‘em” and you will  find endless websites with tips on winning this popular card game; however, the players performing the piece’s namesake are not competing for tangible winnings. Hold ‘em by Roshanne Etezady has sections which are influenced by a rock n’roll pulse and dynamic extremes which create an intense energy throughout.

In Transit is an impressionistic landscape inspired by the dense fogs of Seattle as a starting point followed by a trip to Miami. The first two movements are performed on this concert, Red Walls and Mango; each movement reflecting back on this cross-country journey with the second movement representing a scherzo in a salsa style.

Purchase tickets online or at the door