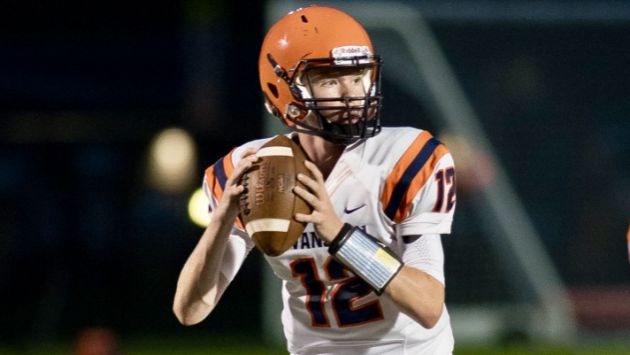 Ben Tarpey made the trip to Peoria for Evanston’s Final Four basketball appearance last spring — but only as a spectator.

A foot injury that took too long to heal kept Tarpey off the postseason cage roster and denied him that once-in-a-lifetime experience that March Madness brings to high school athletes. So now, before the start of his senior year at ETHS, Tarpey is even more motivated to do some damage in the postseason.

Only this time he’s hoping to accomplish that on the football field. The 6-foot-2, 175-pounder has claimed the starting job at quarterback for a Wildkit program that could be primed for a deep postseason run with key players returning from last year’s 6-4 squad on both sides of the ball.

Tarpey moves into the starting role after serving as a backup last season for two-year starter Drew Dawkins, now at Denison University. Tarpey completed 7-of-14 passes for 2 touchdowns but only played sparingly as a junior.

He’ll bring a different skill set than Dawkins, but hopes to lead the Wildkits to at least their first postseason victory since 2003 by the time the season ends.

He spent the summer earning most of the repetitions at quarterback for the approximately 20 7-on-7 games Evanston played, and his progress — as a passer on the field and a leader both on and off the field — was noteworthy all through June and July.

In fact, if you based the summer success on wins and losses — even though it’s not “real football” with no pass rush and no linemen involved in the 7-on-7 setup — the Wildkits enjoyed one of their best summers since head coach Mike Burzawa took over the program, led by their strong-armed QB.

ETHS won 2 games and tied 2 at the annual Central Suburban League Challenge event at Maine West, as Tarpey completed 36-of-48 passes for 10 touchdowns and was only intercepted once. Included in that performance was a perfect 11-of-11, 4 TD effort against Vernon Hills.

At the Illinois Wesleyan University team camp, Tarpey performed at such a high level  that Wesleyan ‘s coaching staff added him to their own recruiting list. He guided the Kits to seven straight wins, including a victory over defending Class 3A state champion Immaculate Conception, before they dropped their last two against Nazareth Academy and Downers Grove South.

“It was hard for me to have to sit out and miss that run (in basketball),” Tarpey admitted after the Wildkits wrapped up their summer workouts this week. “I got hurt right before the Thanksgiving tournament (teammate Lance Jones landed on his foot in practice), and I treated the injury as a sprained ankle because the X-ray showed there was no break. I was out about 3 weeks, came back and played on it for about 2 weeks, but I still didn’t feel great. So I got an MRI and found out there WAS a small fracture, so I missed a couple of months after that.

“I’m happy I got the MRI when I did. But I didn’t get clearance to play again until the week of the state tournament and it was too late for me to dress and be on the roster. But I’m 100 percent now, and we definitely want to make a big run in the (football) playoffs this year. We have the talent to do that, we just have to do a better job of executing and finishing games strong. And I was thinking about the passing of (former coaching legend Murney) Coach Lazier recently, too. What better way to honor his legacy than by getting Evanston football back on top?”

Head coach Burzawa would love to be a part of that postseason ride.

“Ben has waited his turn, and he’s learned and developed and he’s really taken the job seriously,” Burzawa said. “And you really have to give him credit because he’s a multi-sport athlete who tried hard playing both sports (basketball and football) this summer. By the end of June I don’t think there was anyone here more fatigued than Ben.

“It’s true that he doesn’t have a ton of varsity game experience, but he has a great understanding of our offense and of what we want to do. The No. 1 thing I look for at quarterback is decision making. I thought he was at the top of his game at the Wesleyan camp. His throwing ability really turned the heads of the college coaches there and he has competed at a high level all summer.”

Tarpey will also benefit from the return of Ryan Healy to the coaching ranks after a two-year hiatus. Healy, a former ETHS quarterback, is back on the staff replacing Byron Dawkins, who joined the staff at Mundelein Carmel.

“Getting Ryan Healy back is big for us,” Burzawa said. “When we had an opportunity to get Ryan back, it was a no-brainer. I think he’ll take Ben to the next level. They had a good summer together.”

Tarpey isn’t one of the many North Shore quarterbacks that Healy has tutored privately, but the teacher is already impressed by his student’s thirst for football knowledge.

“Ben’s probably one of the brightest kids I’ve ever worked with,” Healy praised. “What I see from him is that he’ll get us into the right plays (against enemy defenses) and then he’ll make plays. He’s like a sponge and he’s always asking good questions. He’ll literally be a coach on the field for us.”

Tarpey worked to add 15 pounds in the weight room and figures to line up under center more than Dawkins ever did in Evanston’s spread offense.  He might not be the run-pass option threat that Dawkins was — the former QB was Evanston’s 2nd leading rusher last year behind Quadre Nicholson — but he spent his summer on target with returning receivers like Mike Axelrood , Garrad Lamour and Malik Ross and can make all the throws required for the Kits to succeed.

“With no pass rush, these 7-on-7 games are always really just an offensive drill,” Burzawa pointed out. “But you still want to get things done and execute well, and Ben has a good feeling now for what we want to do. We’ll tailor our offense to the strength of our quarterback and our skill players, like we always do.”

Tarpey started at both the freshmen and sophomore levels, and feels comfortable with the leadership role that comes with ranking No. 1 on the depth chart again.

“It’s not something totally new for me to be a leader, but it’s on a bigger stage and I know I’ll be able to adapt well with the help of my teammates,” he said. “During the 7-on-7s I wanted to make sure I made my reads as quickly as possible, got good ball placement and had good timing with my receivers. There’s a lot more film to watch, too, and I’ve spent a lot of time taking notes this summer in my basement. I want to feel comfortable enough with my reads so that I feel confident and I can go out and just play.”

The Wildkits start preseason practice  August 6th to prepare for the season opener on August 24th at home against Wheaton North.