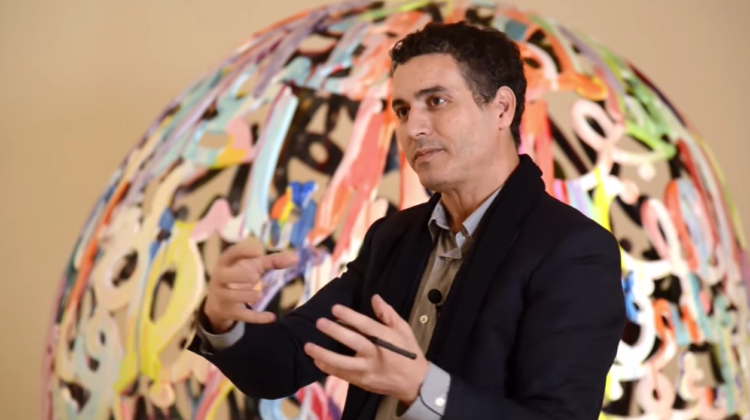 What role did artists and artistic production have in the political upheaval of the Arab Spring and related social and political movements?

Northwestern University will expand this question over three days of conversation with Abdellah Karroum, director of Mathaf: Arab Museum of Modern Art in Qatar and  founder of L’appartement 22, an experimental collaborative space for exhibitions and artists’ residencies in Rabat, Morocco.

At Northwestern, Karroum will lead a series of conversations examining artistic production during the decade preceding the recent uprisings in Tunisia and the Arab world.

“Abdellah Karroum has not only exceptional taste in artistic production by creators working in many different media, but a transnational vision of global trends in the arts and how they intersect with geopolitics,” said Brian Edwards, Crown Professor in Middle East Studies and director of Northwestern’s MENA Program.

Karroum will give a free public talk titled “Generation 00: Artists as Citizens,” (6 p.m. Feb. 23); a presentation at an all day colloquium, also featuring talks by faculty who specialize in Middle Eastern art, culture and politics (10 a.m. Feb. 25); and a lunchtime dialogue with Northwestern’s Middle East and North African Studies (MENA) Program (12 p.m. Feb. 27).

These free public events will expand on the idea of “Generation 00” artists working as citizens who produced works opposing and critiquing the political and social situations of the early 21st century.

Karroum’s research focuses on the years between 1999 and 2011, highlighting a long decade of disruptive artistic initiatives that preceded the democratic uprisings and political transformations of the Arab Spring .

“Today, we find ourselves in the midst of a very important turn where we are both witnessing and participating in the reformulation of the role of cultural practices in the world, especially in relation to the museum and its tentacles,” the curator told Art 21 Magazine. “More recently, I’ve met with a generation of artists at work who are inventing a new vocabulary.”

Karroum’s visit is presented in partnership between the Block Museum of Art, the Department of Art History and the Program in Middle East and North African Studies (MENA) with the support of the Buffett Institute for Global Studies and the Alice Kaplan Institute for the Humanities.

MENA Director Edwards said, “Abdellah Karroum’s remarkable curatorial work in Morocco and Qatar, at opposite ends of the Arab world, has brought a range of inspiring projects and artists, both from the Middle East and North African regions and beyond, to our attention.

“We are enormously excited about this first step in building a collaboration between our institutions, Mathaf, the Block Museum and Northwestern’s programs in art history and Middle East and North African studies, and the individuals across them who share intellectual and creative interests in 21st-century artistic and cultural production.”

On Campus Events with Abdellah Karroum:

The Block Museum’s “Visual Vanguard” series presents conversations with innovative arts leaders working internationally who are transforming the way we experience and think about art today. Karroum’s presentation will be followed by a conversation with S. Hollis Clayson, Professor of Art History and Bergen Evans Professor in the Humanities and Brian Edwards, Crown Professor in Middle East Studies. Reservations and more information available online.

A full day of discussions will further consider the politics and projects of “Generation 00.” The colloquium is free and the public is invited to attend any or all of the sessions. S. Hollis Clayson, Professor of Art History and Bergen Evans Professor in the Humanities, will moderate all sessions. Colloquium reservations can be made online.

11 a.m. to noon: ‘“There was and there were not:’ What was Beirut? The Years between the Wars (1990-2006),” presented by Hannah Feldman, associate professor of Art History; and “Cultural Production in the Capital: Creativity, Neoliberalism, and the 2008 Damascus Arab Capital of Culture Festival,” presented by Shayna Mei Silverstein, assistant professor of communications.

Born in Morocco, Abdellah Karroum has more than 20 years of experience in the art sector, organizing and curating numerous international exhibitions and programs for various institutions in different countries. Most recently, he was associate curator of the 2012 Triennale at the Palais de Tokyo in Paris and Curator of the 2012 Benin Regard Biennial. In 2012, he was appointed artistic director of the Fondation Prince Pierre de Monaco’s International Prize for Contemporary Art.

Between 1993 and 1996, he served as the assistant curator at the CAPC Museum of Contemporary Art in Bordeaux, France. He has been associate curator for various international art biennials, including Dakar 2006, Gwangju 2008, and associate director of the Marrakech Biennial in 2007 as well as the artistic director of the Marrakech Biennial in 2009.

In 2000, Karroum initiated Le Bout du Monde art expeditions with artists and researchers in several continents. He was also the creator of Curatorial Delegation, a methodology for collective artistic projects. He founded the research laboratory Art, Technologie et Ecologie at ESAV (Film School in Marrakech) and other art places in Morocco and remains its director.