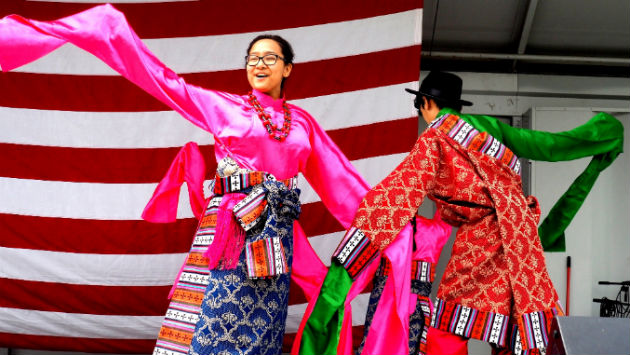 The Tibetan Alliance of Chicago will host a reception to launch the exhibit “Tibetans in Chicago: A Story of Resilience and Success” at the Noyes Cultural Arts Center in Evanston, IL at 6 p.m. on Friday, May 17, 2019 to celebrate 25 years since the inception of the Tibetan community in Chicago.

The exhibit will run through Aug. 23.

In 1992, 93 Tibetan refugees living in villages and refugee settlements India and Nepal began resettling in Chicago as a result of a provision in the 1990 Immigration Act that granted 1000 visas to Tibetan exiles in these countries.

Prior to their arrival, there was only one Tibetan living in Chicago. Unlike most refugees that have financial support from the U.S. government, the Tibetans came as immigrants and therefore had no public support.

Their immigration was sponsored by a private non-profit organization, The Tibetan Resettlement Project-Chicago, established to coordinate all of their immigration services including visa preparation, transportation, sponsorship, housing, employment, health care, language classes, and a variety of other social services.

Originally resettled in the Uptown neighborhood of Chicago, the community has spread across the Chicago region. The Tibetan community now has a Tibetan Community Center in Evanston. Nearly 400 Tibetans now call Chicagoland their home.

To thank their American and Chicago supporters, the Tibetan community has organized an exhibit of photographs and artifacts documenting their presence and growth in Chicago.  The opening on May 17 will feature a short dance performance from the Tibetan community as well as light refreshments and a short welcome speech.

Tibetans began living as refugees in India and Nepal as a result of the Chinese invasion of Tibet in 1959, when over 100,000 Tibetans, including His Holiness the Dalai Lama, the spiritual and political leader of Tibet and winner of the 1989 Nobel Peace Prize, fled over the Himalayan mountains by foot to safety in Indian and Nepal.

Since that time, nearly one million Tibetans have died or been killed in Tibet.  Thousands of monasteries have been destroyed and an attack on Tibetan culture has ensued.

The Tibetans in Chicago see themselves as ambassadors of Tibet – to not only thrive individually, but to represent those Tibetans whose voices can not be heard.