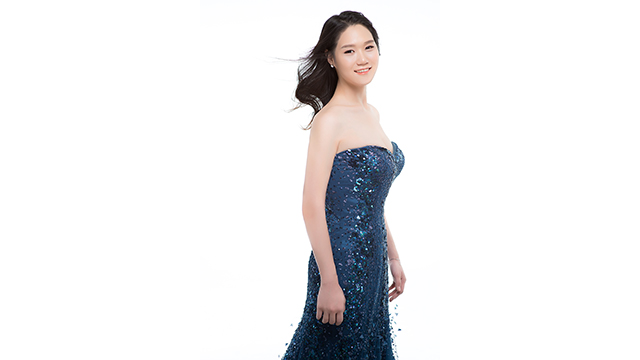 Lee’s recital will be held Thursday, May 11, at 7:30 p.m. at Mary B. Galvin Recital Hall, 70 Arts Circle Drive on the Evanston campus.

Her program features pieces she will play in the competition, including Earl Wild’s “Hommage à Poulenc,” Maurice Ravel’s Sonatine, Chopin’s Sonata No. 3 in B Minor, Op. 58, Marc-André Hamelin’s Toccata on “L’homme armé,” Beethoven’s Sonata No. 31 in A-flat Major, Op. 110 and Petrarch Sonnet No. 104 and Hungarian Rhapsody No. 12 by Liszt.

Lee is a current doctoral candidate at Northwestern studying with associate professor James Giles and the first Bienen student to be selected for the competition, which is widely recognized as one of the most important in the world.

Lee, who grew up in Korea, started piano lessons when she was five, but by age nine, she discovered she loved to play for people and knew then she wanted to play professionally.

“The piano can sing, the piano can be part of an orchestra. You can imitate any instrument on the piano. To me, the piano is the whole world of music,” Lee said.

“Music is language to me. When I came to the states, I couldn’t speak the language. Piano provides a way to communicate and touch someone’s heart.”

Lee’s teacher James Giles will be in Fort Worth, Texas to support his student and cheer her on.

“Competitions are a celebration of the music we play, an important showcase for a young pianist’s abilities and an opportunity to play for important people. In a competition like the Van Cliburn, the media glare is extremely intense. There are television cameras everywhere, international press and interviews. These are extraneous things that don’t have anything to do with playing the piano. At this point preparing is a large part mental and about getting into a zone so she can do what she knows how to do,” Giles said.

The 2017 Cliburn Competition will take place May 26 to June 10 at Bass Performance Hall in Fort Worth, Texas.

The 30 competitors in the 2017 Cliburn were chosen from 290 applicants worldwide, and they hail from 16 countries and locales. There are 21 men and nine women, ranging in age from 18 to 30.

Competition performances will be live streamed on the Cliburn website, and the final round on Saturday, June 10 will be broadcast in partnership with Fathom Events at select movie theaters nationwide. Chicago area screenings include Century 12 Evanston/CinéArts 6 in Evanston and River East 21, City North Stadium 14 and Webster Place 11 in Chicago.

EunAe Lee from Seoul, South Korea, is a prizewinner of the 2015 Bösendorfer USASU International Piano Competition, the 2014 Hilton Head International Piano Competition and the 2016 World Piano Teachers Association International Piano Competition. She also earned the Alice Rosnet Prize for her interpretation of Béla Bartók and the Bärenreiter Urtext Prize in the 2011 ARD International Music Competition in Munich. Lee was featured at the Dame Myra Hess Memorial Concerts and the Pianoforte Salon Series, both broadcast live on WFMT 98.7 FM. Performance highlights include solo and chamber appearances in Lincoln Center’s Alice Tully Hall, the Peter Jay Sharp Theatre, Kennedy Center’s Millennium Stage and Merkin Hall, among others. Lee holds bachelor’s and master’s degrees from the Juilliard School and an artist diploma from the Mannes College of Music, where she studied with renowned American pianist Richard Goode. Lee is a doctoral candidate at Northwestern University’s Bienen School of Music and a student of James Giles associate professor, piano.

The Cliburn advances classical piano music throughout the world. Its international competitions, education programs and concert series embody an enduring commitment to artistic excellence and the discovery of new artists. Established in 1962, the quadrennial Van Cliburn International Piano Competition is widely recognized as “one of the world’s highest-visibility classical music contests” (The Dallas Morning News) and remains committed to its original ideals of supporting and launching the careers of young artists, ages 18 – 30. It shares the transformative powers of music with a wide global audience through fully-produced webcasts and by providing commission-free, comprehensive career management and concert bookings to its winners. Rounding out its mission, the Cliburn also produces the Cliburn International Junior Piano Competition and Festival for exceptional 13 to 17-year-old pianists (second edition, June 2019) and the Cliburn International Amateur Piano Competition for outstanding non-professional pianists age 35 and older (eighth edition, June 2020).

Over a four-year cycle, the Cliburn contributes to North Texas’ cultural landscape with more than 170 classical music performances for 150,000 attendees through competitions, free community concerts and its signature Cliburn Concerts series at Bass Performance Hall, the Kimbell Art Museum Piano Pavilion and the Modern Art Museum of Fort Worth. It presents 1,000 in-school, interactive music education programs for more than 200,000 elementary students. During the same time period, it garners the world’s attention with more than one million visits by people from 155 nations for live concert and competition webcasts; 300 concerts worldwide booked for competition winners; more than 5,000 news articles about the Cliburn and its winners; regular national broadcasts to 245 public radio stations; and a PBS documentary airing in a potential 105 million households. Detailed information about the Cliburn and its programs is available at Cliburn.org.