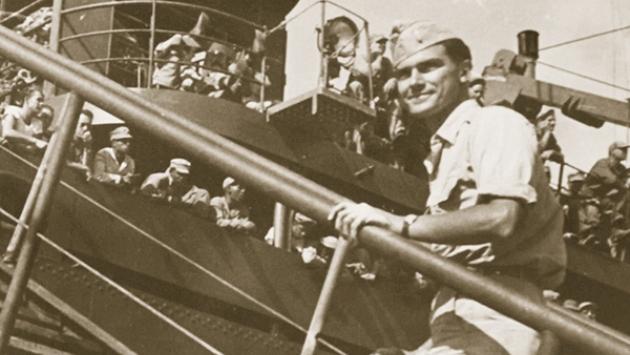 Westminster Place retirement community screens new documentary of WWII memories of some of its 80+ residents who are veterans in a Veterans' Day Salute.

World War II, with its estimated 55 million lives lost and involvement of more than 50 countries, ended almost 70 years ago. The numbers and voices of its veterans are rapidly dwindling.

To help preserve the memories of its residents who are veterans, Westminster Place retirement community created a documentary titled "Memorable Moments."

The film will screen at a Veterans' Day Salute event on Tuesday, Nov. 11, at 2 p.m. in the Caldwell Assembly Hall to honor its more than 80 resident who served in the armed forces.

Some of the memories shared are of battle, fear and courage.  "I realized that this might be my last moment in this lifetime… but I thought, I've got to do it, I've got to go," recalled John Goad, 88, as a combat infantryman  of A Company (the "Go Devils"), 60th Infantry Regiment of the U.S. Army, under orders to move out while pinned down by enemy fire. The soldier who had  gone before him had been mortally wounded. Goad was just 18 years old.

"You just keep doing your job in a situation like that," said Reinald Werrenrath, 99, a former U.S. Naval lieutenant, while recounting a two-plane kamikaze attack on his ship, one taking out a gun mount and about 35 men before crashing and exploding in the ocean.  Other memories recall connections to storied names, fellow servicemen and simple human moments that also represented wartime experience.

"We wanted to represent the many stories and experiences of our residents whom we are honoring for their service," said Meghan Dietrich, coordinator of residential activities at Westminster Place who produced the documentary. "Many had lived through The Depression and then fought in the war, surviving experiences that made them members of 'The Greatest Generation.'"

Westminster Place invites the public to attend the Veterans' Day Salute and reception to follow in the Caldwell Assembly Hall at 3200 Grant St. in Evanston. For more information, please contact Meghan Dietrich at 847-866-1610.