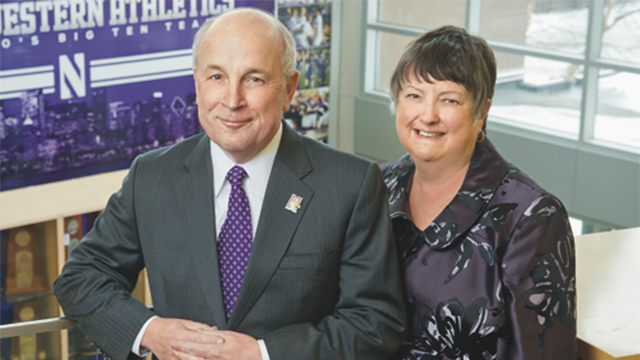 A new endowed gift from Northwestern University Trustee Stephen R. Wilson ’70, ’74 MBA and Susan K. Wilson ’70 will support the outreach efforts of the Mary and Leigh Block Museum of Art at Northwestern.

“Steve and Sue Wilson are remarkable leaders within Northwestern and Evanston,” said Lisa Corrin, the Block Museum’s Ellen Philip Katz Director. “We are honored by their recognition of the Block Museum as a site of innovative teaching and learning experiences for both our students and our community. This visionary gift will help ensure meaningful engagement with art through partnerships and will expand the reach and impact of our programming.”

“As Northwestern alumni, we have been excited by the work of the Block Museum in recent years to engage campus and community in teaching and learning experiences,” Sue Wilson said. “Free and open to all, the museum is uniquely poised as a resource to serve wide audiences and bring diverse communities together through art and conversation.”

The Wilson Fund will endow the leadership position of the Block Museum engagement department, which oversees museum-wide education, programming, partnerships and communication efforts. The gift will also provide additional support for public programs and engagement between the museum and the larger Northwestern campus and community, including funding for youth educational programs. It is these community collaborations, such as the Block’s long-term partnership with the Evanston-based youth development agency Youth Opportunity United (Y.O.U), that will be expanded and deepened through the Wilsons’ gift.

“Partnering with the Block Museum over the last three years has truly been transformational for Y.O.U.’s arts program and life-changing for the youth we serve,” said Seth Green, former executive director of Y.O.U. “We are deeply grateful that Sue Wilson originally had the vision to connect the Block Museum and Y.O.U., and we are overjoyed that this new Wilson Fund will ensure the Block’s engagement efforts continue far into the future. The Wilsons are true leaders in the movement to expand educational opportunity.”

Susy Bielak will serve as the inaugural Susan and Stephen Wilson Associate Director of Engagement. Bielak joined the Block in 2013 as associate director of engagement and curator of public practice to lead the development of the museum’s new engagement department. Prior to her work at the Block, Bielak served as the associate director of public and interpretive programs at the Walker Art Center. Under Bielak’s leadership, the engagement department works to bring to life the mission and vision of the museum — serving as a convener, bridging campus and community, and using art as a springboard for exploring issues and ideas of relevance to students and the public. The department has fostered collaborations with more than 60 Northwestern departments and dozens of community partners, including Evanston/Skokie School District 65 and Y.O.U.

Both Sue and Steve Wilson graduated from Northwestern in 1970, and Steve earned an MBA from the Kellogg Graduate School of Management in 1974. He applied the perspectives and skills acquired at Northwestern to build CF Industries Holdings, Inc., into a global leader in fertilizer manufacturing and distribution. He is the retired chairman and chief executive officer, serving 10 years as CEO.

After graduating from Northwestern with a journalism degree, Sue Wilson had an eight-year public relations career from which she retired to focus on raising their children, Elizabeth and Jeffrey, and for many years served as a volunteer at the Evanston Public Library. Currently she serves on the Board of Advisors of the Block Museum, is a member of the Women’s Board of Northwestern and is on the Community Council of Y.O.U.

The Wilsons have demonstrated extraordinary loyalty to the University through their philanthropy. Their most recent gift to the Block Museum reflects their family’s longstanding interest in education and investment in the Evanston community. Steve and Sue Wilson have provided generous support to the Northwestern Academy for Chicago Public Schools, a program of the School of Education and Social Policy at Northwestern, as well as Northwestern Athletics.

The Wilsons’ gift counts toward We Will. The Campaign for Northwestern, the University’s $3.75 billion fundraising initiative. The funds raised through the “We Will” Campaign are helping realize the vision set forth in Northwestern’s strategic plan and solidify the University’s position among the world’s leading research universities.