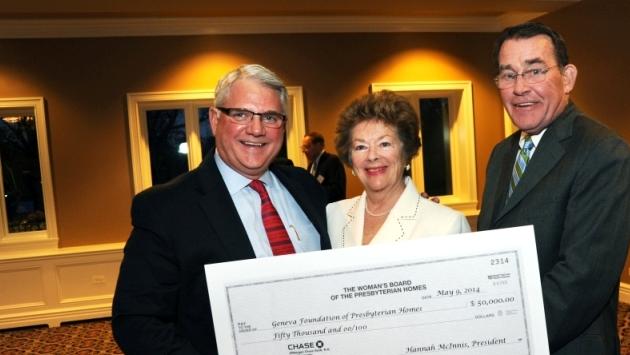 The Woman's Board of Presbyterian Homes celebrated its centennial with special receptions attended by board members, residents and executive management of Presbyterian Homes on Wednesday, May 21, and Thursday, May 22, at Westminster Place at 3200 Grant Street, Evanston, IL. Significant gifts were given to the organization in honor of this milestone anniversary.

The Woman's Board presented several gifts for Westminster Place to Todd Swortzel, president and CEO of Presbyterian Homes and Neele E. Stearns, Jr., chair of the Board of Directors of Presbyterian Homes. Among the gifts were a financial contribution to the Geneva Foundation Fellowship Fund, a benevolent fund which protects residents who face challenging financial times. Other gifts included adding automatic doors at the exterior entrance of Elliott Chapel and installing T-Coil Hearing loop systems  in community rooms–Elliott  Chapel, Elliott Hall, and Caldwell Assembly Hall, which magnetically transmit sound to hearing aids and improves the listening experience for those with auditory impairments.

"The Woman's Board is so proud to celebrate 100 years of caring service," says Woman's Board  President Hannah McInnis. "We are equally proud to present these centennial gifts which represent our continuing dedication and commitment to improving the quality of life for older adults at Presbyterian Homes."

A final gift was a bronze relief work of art commemorating the Board's one hundred years of service.  Designed by sculptor Fran Volz of Arlington Heights, the relief depicts a pair of woman's hands holding the hands of an older adult.

"The Woman's Board has been at the heart of Presbyterian Homes since the organization began," said Todd Swortzel. "We are deeply grateful for The Woman's Board,  for these centennial gifts and for The Board's tireless role of service, fundraising and participation in the lives of our residents."

The Woman’s Board of Presbyterian Homes

Founded in 1914, The Woman’s Board of Presbyterian Homes is a service organization whose goal is to enhance the quality of life for residents at Presbyterian Homes. In the early 1900s, the Presbytery of Chicago brought together 21 women from area Presbyterian congregations and charged them with equipping and furnishing a new Presbyterian Home for the “aged.” These women became the Women’s Board of Managers in 1914.  For many years, the Board handled admissions, oversaw the growing staff and made arrangements for activities and entertainment.   They worked alongside residents sewing bed linens and draperies and preparing food in the kitchen.  The women also raised funds to support the Presbyterian Home.

In recent years, the Woman’s Board has devoted nearly 12,000 volunteer hours annually, which is the equivalent of more than six full-time employees.  Board members visit residents, transport them to activities, and host various special functions, concerts, and receptions.

Through operating various campus shops (furniture, books, resale clothing, jewelry and household items), Board members raise money to support a wide range of projects and programs at Westminster Place and beyond.  Past projects include the Wright Manor elevator, two campus buses, and underwriting for the ongoing Chaplain Intern Program and “Gift of Music” organ recital series.  Proceeds from its shops and gifts to its annual appeal, have enabled the Woman’s Board to donate more than $3.0 million to Presbyterian Homes over the last quarter century.

Although the original board members were from Presbyterian churches throughout the entire Chicago Presbytery, current members are of many faiths and come from the North Shore, Northwest Suburbs and Chicago. About one third of the members are residents of Westminster Place.

Founded in 1904, Presbyterian Homes is a not-for-profit organization with a national reputation for creating extraordinary retirement communities. Presbyterian Homes serves more than 1700 older adults through its residential and healthcare programs on campuses in Evanston, Lake Forest and Arlington Heights. The organization is accredited by the CARF/CCAC, the nation’s only accrediting body for retirement communities.