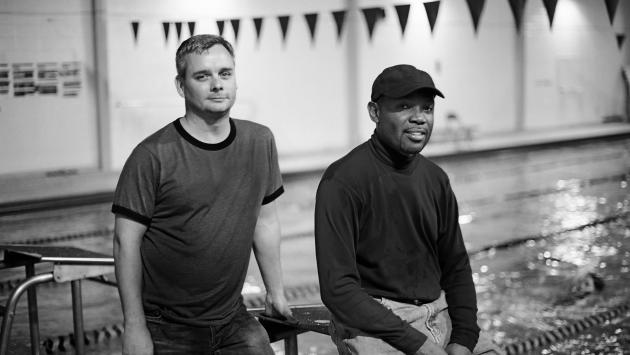 At a ceremony at the YWCA Evanston/North Shore on what would have been Oswald “Oz” Roper’s birthday, his family, friends and co-workers honored his 20-year legacy with the Flying Fish Aquatics program by renaming the Aquatics Scholarship Fund in his name.

It will now be called the “Oz Fund,” and contributions may be directed toward either aquatics scholarships or improvements to the YWCA’s aquatics facilities. The fund will be the recipient of a significant contribution from the Oswald Roper Memorial Fund established by his family and friends.

Roper, shown on the right above with Aquatics Director Pete Caragher, would have been 60 years old last week, but he died in January, six months before his 20th anniversary as a swim instructor and coach.

In addition to his role as assistant aquatics director, Roper had an office in the pump room in the basement, and he managed the aquatics facilities.

“Oz would have been a fan of the fund,” Caragher said. “He was passionate about swim lessons, and he was also a passionate caretaker of our facilities.”

“I am proud to be part of an organization that is doing this is his name,” said Karen Singer, president and CEO of the YWCA Evanston/North Shore.

“We strongly believe every child should learn to swim, and it has always been our commitment to provide swim instruction for every child in our lakefront community. That meant a lot to Oz, who came from Jamaica where he grew up swimming at the beach. Oz would also have been proud that we’re focused on our facilities, because they meant a lot to him and we need to continue to create a better environment for all kids to learn to swim.”

The YWCA provides full or partial swim scholarships to 150 to 200 children annually, and provides free instruction to another 100-150 children who come with community groups, including Evanston Swims!, the Ted Fund, Fleetwood-Jourdain, and TE & Company.