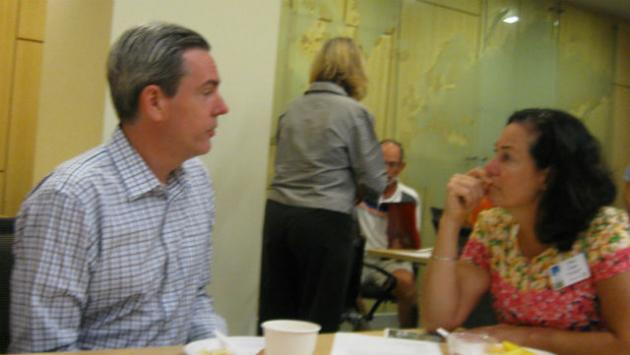 The board chair of the not-for-profit Evanston Lakehouse and Gardens still has hopes of reaching an agreement with the city to rehabilitate and manage the beleaguered Harley Clarke mansion, adjacent to the Grosse Pointe Lighthouse on the city’s lakefront.

The representative, Patrick Donnelly, pressed the organization’s case at the regular weekly meeting today of the Rotary Club of Evanston Lighthouse.

He said the group plans to attend the city’s open house, scheduled for Aug. 3, for groups and individuals interested in the long-range use of the facility.

As it stands now, the group has secured federal status as a 501(c)(3) charitable organization, which means that entities can claim a federal tax deduction on contributions made to it.

Unless the Aug. 3 walk-through presents an unexpected surprise, he said, the group estimates it would take about $4.5 million to rehab the building and begin operating in a financially sustainable manner.

Using as its model the Highfield Hall & Gardens in Falmouth, Mass., the group figures it can operate on a better-than-breakeven basis by operating a café in the mansion’s coach house and rent out portions of the main house for special events, such as conferences and weddings.

While parking is limited to about 75 spaces that fills quickly during the beachgoing season, Donnelly said that valet parking could be employed to make the operation feasible, while during the off-season, the present parking available should suffice.

A year ago, the group attempted to solicit contributions, but only raised about $25,000 after two months of trying.

But Donnelly said he feels the $4 million goal would be doable, once it reaches an agreement with the city and launches an extensive campaign. Once in operation, he said his board envisions annual operating revenues of $400,000 to $500,000.

The group’s vision incorporates historic preservation of the house and gardens, an environmental education and recreational facility, event and meeting spaces, a seasonal and cultural venue, and a coach house café and patio.

The upshot, in Donnelly’s view, is that the building and parkland would not be privatized, nor would the facility continue to be a financial burden on the city. Instead, Harley Clarke would be a viable entity providing jobs and revenue to the city, with the adjacent Jens Jensen gardens restored and enhanced.