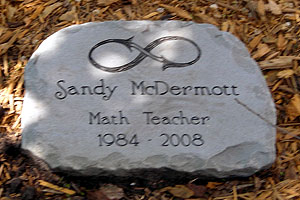 The altar at St. Joan of Arc Catholic Church in Skokie seemed enormous to 13-year-old Raisa Tolchinsky before she stepped up to it.

It was February last year, and Raisa was about to speak to a sanctuary packed with about 2,000 friends and loved ones of Sandra McDermott.

McDermott, Raisa’s sixth-grade math teacher at Nichols Middle School, had collapsed at the school two weeks before. And she died of a previously-undetected heart condition on Feb. 9. 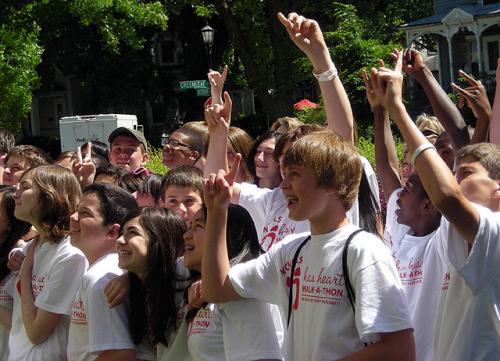 Nichols students prepare to step off on the walk-a-thon.

Raisa, now 14, shared her recollections today before the second-annual Sandy McDermott Walk-a-thon, in which every Nichols student and faculty member – about 615 people in all – collect donations for a three-mile walk.

Last year, the event raised $20,000, which was split between the American Heart Association and a college scholarship fund for a Nichols student. Organizers expected to raise about the same amount this year.

Raisa is more articulate than an average adult. But she confesses to feeling a bit uncomfortable speaking before large crowds. And this was more than large. People were lined up outside the doors. But Raisa remembers something strange happening as she approached the altar to read a poem she’d written for McDermott.

“It was a moment when I realized it wasn’t about me,” Raisa recalled. “Something was telling me it just had to be done.”

And then the altar seemed much smaller. The way Raisa describes the moment at the altar sounds similar to the way she describes being in McDermott’s class. Sixth grade, Raisa points out, can be a difficult time. But McDermott’s class was a daily stabilizer. Something about the way McDermott looked her in the eye made Raisa feel like she mattered.

“It was something you could rely on when everything else was really turbulent,” Raisa said.

At the funeral, Raisa stepped to the altar and began her poem, which posed a question: “How can you describe someone who completely changed your soul?”

“She was right there with you, baby,” Sue Fisher, McDermott’s close friend and colleague, said to Raisa as Raisa recalled the moment at the altar.

Fisher, one of the walk-a-thon’s organizers, speaks with a slight drawl from Tennessee, where she grew up. She arrived at Nichols as a teacher 25 years ago – just as McDermott started. They were both at least 15 years younger than all their other colleagues. So they hit it off. And “close friends” is perhaps not the most accurate way to describe Fisher and McDermott. Fisher says they were “best friends.” But even that phrase doesn’t quite capture the relationship Fisher describes.

“I don’t know if you can have two women who were closer,” Fisher said. “Destiny put us together.”

McDermott was there when Fisher’s son, Matt, was born. And Fisher saw McDermott’s twin boys, Geoff and Ryan in the ultrasound. The boys, along with McDermott’s youngest son, Kevin, grew up together. They played football and volleyball, and shared summer evenings at their families’ neighboring lake houses in Wisconsin. The families were full-time neighbors, too: Fisher followed McDermott out to Glenview about 12 years ago and bought a house next door.

McDermott was in Fisher’s wedding, and was also there for Fisher’s divorce. It was McDermott who counseled Matt through that period.

Analeise Parchen, another of McDermott’s Glenview’s neighbors, remembers McDermott taking a similar interest in her own children. McDermott just did it naturally.

“She just championed children,” Parchen said. “She had a way of disarming them.”

McDermott, apparently, championed everyone. She was Katie Myers’ mentor when Myers started teaching at Nichols two years ago. Myers said McDermott taught her how to teach.

“She was like my mom, literally,” Myers said as she stood in McDermott’s old classroom.

That classroom now belongs to Myers. She made sure to get it after McDermott died.

“I wanted it to be someone who could remember her,” Myers said.

(Above: A memorial in the McDermott Garden at Nichols Middle School. Photos by Ben Myers.)