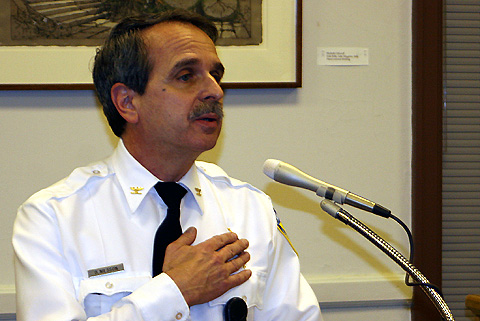 Evanston's interim police chief, Dennis Nilsson, who wraps up a 37-year career with the city this week, was honored at Monday's City Council meeting.

Evanston's interim police chief, Dennis Nilsson, who wraps up a 37-year career with the city this week, was honored at Monday's City Council meeting.

Assistant City Manager Judy Aiello recapped his career, from his hiring as a patrol officer in 1969 after he returned from military service in Vietnam, through his steady rise through the department's ranks.

"Dennis has been the father of community policing in Evanston," Ms. Aiello said, "and has become a trainer and consultant on community policing. He's the heart and soul of the department and we'll really miss him."

Chief Nilsson said he had enjoyed his service to the community and that he was proud thatÂ "I'll return this star to you Friday untarnished."

Mayor Lorraine Morton said that on top of all his professional service, "Dennis is just a darn nice man."

And Alderman Steve Bernstein, 4th Ward,Â said, "Dennis Nilsson was the first walking patrolman in the city" and "endeared himself to everyone" on the beat around Nichols School. "My children, young at the time, knew him by first name, as did everyone," Ald. Bernstein added.

Chief Nilsson, who has taught in criminal justices programs part-time while on the force, plans to continue his teaching work after his retirement.