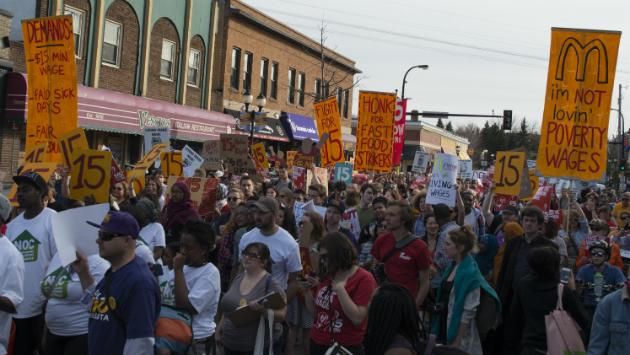 While other communities, including Chicago, have responded to concerns about economic pressure on lower income residents by raising the minimum wage, there's been no significant movement toward taking such action here in Evanston.

In a recent interview, Mayor Elizabeth Tisdahl said she's not heard of any push for a local increase in the minimum wage. Tisdahl, who says she supports a minimum wage increase at the state level, said she's concerned that a local increase could prove damaging to restaurants and other businesses in Evanston that hire a lot of low-wage workers.

While Evanston aldermen have spent months considering a plan to toughen the city's so-called inclusionary housing ordinance and are scheduled to debate it again at a meeting in September, other ideas for addressing the gap between the income and expenses of many residents have so far gone nowhere.

Mayor Tisdahl, in her state of the city address in March, suggested "micro units" — apartments smaller than those now permitted under the city code — as an approach that's worked in other cities. And, in April Community Development Director Mark Muenzer said he'd begun a preliminary review of such options. But no actual proposal along those lines has emerged yet for City Council consideration.

In March, the Daily Northwestern reported that some community activists have been interviewing low wage workers here to document their troubles, but despite holding individual meetings with aldermen, that hasn't led to a proposal for action on the minimum wage issue.

Meanwhile, Seattle opted last year to gradually raise the minimum wage to $15 an hour and New York is considering a similar proposal. Chicago aldermen voted for a $13 minimum wage. And Democratic presidential candidate Hillary Clinton has endorsed the fight for a $15 minimum wage.

Although higher than the federal minimum wage of $7.25, the rate in Evanston remains at the state-mandated $8.25 an hour.