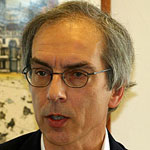 There'll be no contest in March for Democratic primary voters in the 17th state House district, which includes much of northwest Evanston.

Kyle Frank, of 4125 Enfield in Skokie, is running unopposed in the Republican primary.

Smith, an attorney and community activist, told Evanston Now that, with the state party's backing, Fine stands to have a substantial fundraising advantage.

Under new campaign finance rules, he said, the party can give substantially more to candidates than most supporters can, and it can also sway the support of union and business groups.

Smith compared his race to the failed Scottish rebellion led by William Wallace  dramatized by Mel Gibson in the movie "Braveheart."

While people love the hero, Smith said, they forget that "most of the time, striving against the odds doesn't pan out, and takes a lot of other people down with you."

Smith said the race was also made more challenging by the short campaign season.

The race was triggered by State Sen. Jeff Schoenberg's November decision to retire, which led Daniel Biss, who now represents the 17th District, to run for Schoenberg's job.

Smith said the party organizations in Evanston and New Trier townships don't plan to make their endorsements until the end of January and the only candidate forum won't be held until mid-February, making it likely the outcome would hinge on costly mass mailings, rather than in depth debate about the issues.