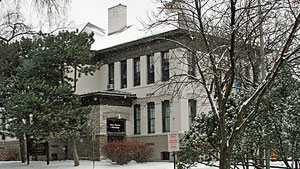 But he says that despite talks "over the better part of a year," no final proposal has been developed to bring forward to the City Council.

Bobkiewicz says the general concept is to have Piven renovate a portion of the space in Noyes in return for a long-term lease from the city.

Piven wants to expand its footprint in the building and city officials have concluded that the existing short-term arrangements with Piven and a variety of other arts groups that use the building have not generated enough revenue to cover both the cost of operating the space and needed capital improvements.

Julie Phelan, who lives near the Noyes Cultural Arts Center, launched a website last week complaining about what she sees as a lack of transparency in negotiations about the future of the arts center.

Phelan, who formerly worked as an artist, but is not a tenant at the center, says she's concerned in part because she's heard that summer youth arts camps which have been run from the center are going to have to find a new location this year. And she says she's concerned about safety issues at some other city recreation sites.

Update 9:20 a.m. 2/5/13: Bobkiewicz told aldermen Monday night that there are no plans to displace the arts camps from Noyes this summer, noting that they are among the city's most popular summer camp offerings. He said where they would be held in future years hasn't been determined yet.

"Some in the community feel that any change to the existing arrangement is not a good thing," Bobkiewicz said, but he said aldermen see the Noyes Center as "an untapped resource that can blossom with further investment."

It's a potential economic development tool for the community, Bobkiewicz says, a place where more people from all over could go and enjoy the visual and performing arts.

He said he met with members of the tenants association at Noyes on Jan. 7 for about 90 minutes "and fielded questions until they no longer had any."

Bobkiewicz says the Piven proposal "is not an insignificant project" — with cost figures in the range of $2 million to $5 million.

He says the funding would come from some combination of immediate and long-term fundraising by Piven, coupled with a loan from the city that would be repaid over time.

The City Council last month rejected plans to turn a city-owned storefront on Howard Street into a new home for Chicago's City Lit Theatre, after renovation cost estimates for the project nearly tripled to $1.7 million.

Alderman Ann Rainey, whose 8th Ward includes the Howard Street site, has vowed to bring a revised version of that project back to the council.

The City Council last week received a study funded by a federal grant that proposed creating three new performing arts venues in downtown Evanston, but it drew criticism from Mayor Elizabeth Tisdahl for offering little in the way of explanation for how the estimated $130 million cost of the new spaces might be paid for.

Bobkiewicz said he's pledged to the tenants association at Noyes that they'll have a couple of weeks to look at any proposed final agreement with Piven before it is presented to the Human Services Committee.

He said that while the talks with Piven are progressing, he's not sure whether an agreement will be reached in time for the committee's March meeting, but that he will meet with Piven board members later this week to try to wrap it up.

"I'm very mindful of the space issues," Bobkiewicz said, adding that he's committed to trying to avoid displacing any of the existing Noyes tenants.