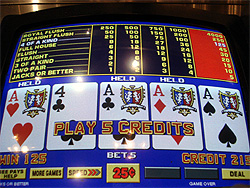 The move makes Evanston one of the first communities in the state to rebuff efforts by state lawmakers to introduce video poker and other gaming devices into local communities.

The state plans to use gaming revenue to pay for a $31 billion public works program.

After an 8-1 vote in favor of the move at the Rules Committee meeting last week, the vote Monday was such a foregone conclusion that the city's information office sent out a media alert Monday morning predicting the outcome and inviting Chicago TV stations to show up to record it.

Even Alderman Ann Rainey, 8th Ward, the lone vote against the measure at the Rules Committee, joined in voting for the ban Monday.

There was no debate about the issue at the council meeting, but aldermen have said they fear the gaming devices would lure unsuspecting college students into a lifetime addiction to gambling.

At the Rules Committee meeting, the aldermen rejected suggestions to survey owners of businesses eligible to have the machines under state law about whether they thought the machines would benefit their businesses.

No citizens spoke for or against the measure at the council meeting. In an interview last week, Chamber of Commerce Executive Director Jonathan Perman said he wished the aldermen had surveyed local businesses before acting.

But Perman suggested that, given the 30 percent tax rate on the gambling devices and the 50-50 split of after-tax revenue with the machine providers, restaurateurs might find it more profitable just to try to keep customers in their establishment longer by selling them an extra drink or dessert rather than having them spend their entertainment dollars at a video poker machine.

Officials of the state gaming board, which has to administer the new law, have estimated it will take 12 to 18 months to adopt regulations needed before the first video gaming licenses in the state can be issued.