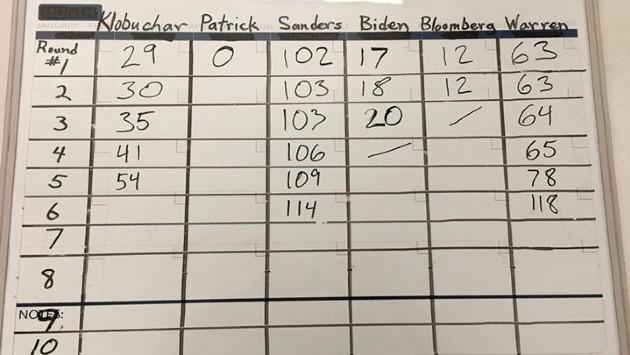 Members of the Democratic Party of Evanston Sunday failed to endores a candidate for president, although they gave a plurality of their first-round votes to Vermont Sen. Bernie Sanders.

Sanders received 102 votes out of 223 cast. He would have needed two-thirds of the vote to win an endorsement.

The party organization also conducted a test of ranked choice voting, in which the lowest-scoring candidate in each round is eliminated in the next round and voters can make a new choise.

As the chart above, posted online by the party shows, when that sorting process was complete Massachusetts Sen. Elizabeth Warren edged out Sanders 118-114 to win a majority of local party votes — but that still would not have been enough to win the endorsement.

The only candidate to meet the two-thirds vote endorsement threshold during the meeting at the Unitarian Church of Evanston, 1330 Ridge Ave., was Cook County State’s Attorney Kim Foxx.

On referendum questions, the ballot question seeking to maintain the nonpartisan format for local elections was endorsed. The proposed Evanston Voter Initiative won a majority of the votes cast, but fell short of the endorsement threshold.