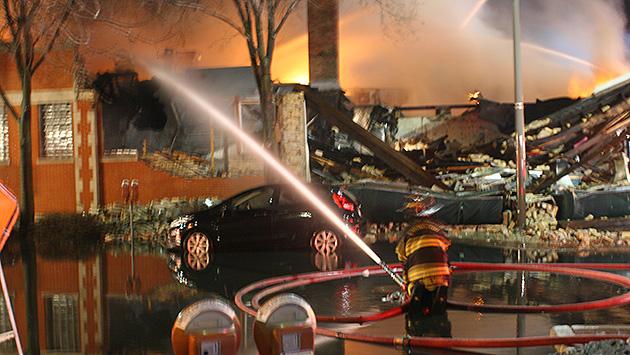 The Pine Yard restaurant building that burned last month in Evanston wasn't equipped with fire sprinklers, and — but for favorable weather conditions — Fire Chief Greg Klaiber says, the blaze might have spread down the entire block.

Klaiber told aldermen Monday night that the wood bow truss roof design used in the building is the most dangerous type of roof structure to deal with in a fire — that if it becomes weakened by the flames, it's prone to sudden collapse. 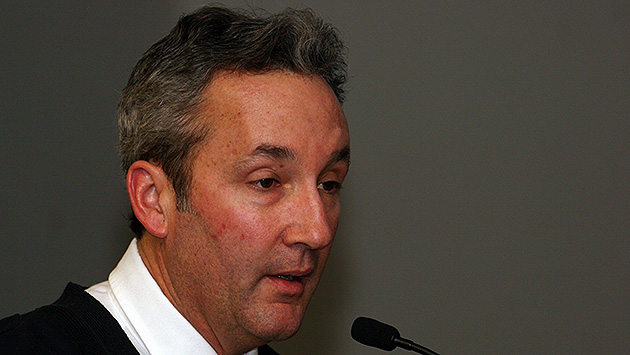 Over the years numerous firefighters in other communities have been killed in such incidents.

That forced fire crews to pull back from the roof and interior of the building shortly after the fire began around 2:30 a.m.

Klaiber says they ended up pouring more than a million gallons of water on the fire from three aerial ladders and a number of additional hose lines during the five hours it took to extinguish the blaze.

Klaiber says they were lucky in that the temperature was relatively warm and there was very little wind in the early morning hours of Dec. 29. Otherwise, he says, the fire could have spread all the way down the block to Maple Avenue.

And several other buildings on the block have the same bow truss roof design as the Pine Yard. 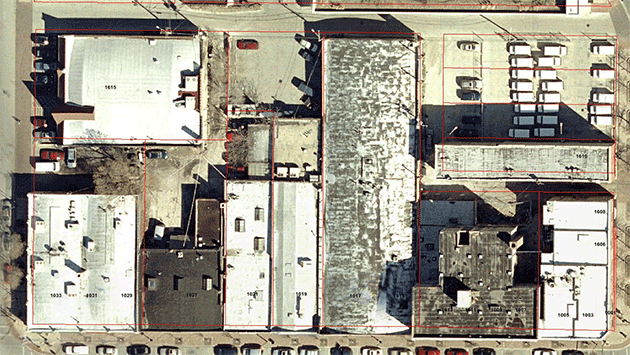 A half dozen buildings with bow truss roofs can be identified from the arched shape of their roofs in this aerial view of the north side of the 1000 block of Davis Street. The building that burned is at the lower left of the photo.

But if a substantial renovation project covers more than 5,000 square feet in such a building, retrofitting the building with sprinklers would be required.

The Pine Yard building was divided into spaces for three different businesses — each less than 5,000 square feet — which had been renovated at different times and so didn't fall under the sprinkler rule.

One bow truss building that is getting sprinklers is the site of the planned Smiley Bros. brewpub, just north of the Pine Yard building on Oak Avenue. Janetske says adding sprinklers is a required part of the renovation project that's underway there.

Sprinklers are the ideal method of protecting a building from fire and keeping a fire from spreading, Janetske says.

But because they can be very expensive to install, building owners are frequently reluctant to add them.

They are required in new building larger than 5,000 square feet in the city — so they are present, Janetske said, in new commercial buildings like the Walgreens on Chicago Avenue and the GFS Marketplace store on Oakton Street.