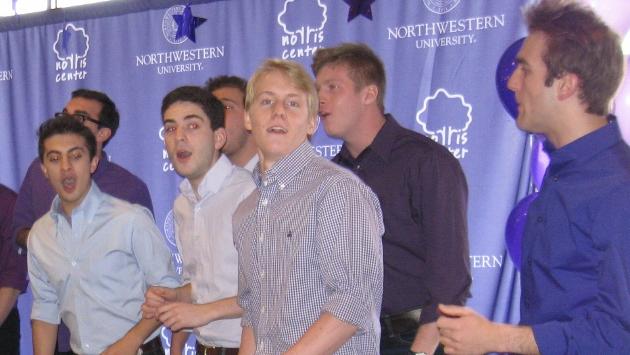 Before the lakefill at Northwestern University, there was only Scott Hall where students could eat and network. But 40 years ago today, the Norris Center was opened on land created by filling in a portion of Lake Michigan, adjacent to its Evanston campus, and it is now bursting at the proverbial seams.

To celebrate, the center invited the Northwestern community Tuesday to enjoy entertainment by the Freshmen 15, shown in the photo above, and savor its own 40th birthday cake, plus price rollbacks for the day at many of the concessions within the center.

Norris is the center of activity at the university. It holds hundreds of conferences and small student meetings throughout the year, and retirees taking courses at the university can be seen conversing with freshmen right out of high school.

Food options include a cafeteria with a salad bar, plus a Starbucks and now the Frontera Fresco, a Mexican eatery that holds its grand opening Wednesday with an appearance by chef Rick Bayless. The center also houses a bank, a bookstore, an outdoor ice skating rink, and hosts the annual Dance Marathon, which annually raises money to support a major charity as well as funding a significant contribution to the Evanston Community Foundation.

But the center's popularity has led to a space crisis that is expected to lead to an expanded university center, according to Patricia Telles-Irvin, the university's vice president for student affairs, who spoke at the celebration.