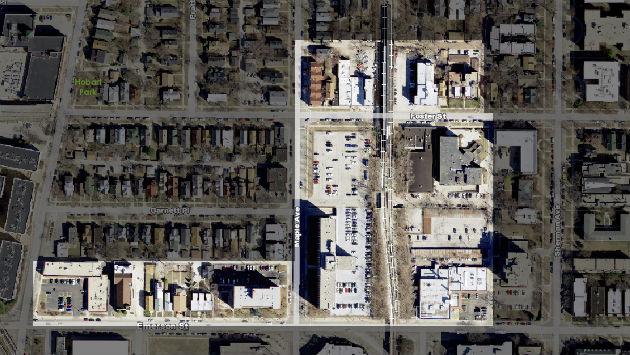 The Evanston City Council's Planning and Development Committee tonight is scheduled to discuss a recommendation from city staff to rezone roughly 15 acres of land just north of the current edge of downtown for transit-oriented development.

No detail was available about the nature of the proposed changes, other than that they would be designed to "act as a transition between the downtown core and lower-density residential neighborhoods" further to the north and east and that they would include five different subareas.

The text description of the affected area, as depicted on the map above, is somewhat more limited than boundaries that had been discussed last spring. The new description includes properties from the Foster Street CTA station south to Emerson Street and from the alley west of Sherman Avenue to Maple Avenue, with an extension to Ridge Avenue for properties on the north side of Emerson Street.

Maximum building heights permitted in the area now range from 50 to 105 feet. The area affected is within a quarter mile of the Foster Street Purple Line station.

Since the issue is proposed as a discussion item, no formal vote is expected, but aldermen may give staff guidance on whether they would find proposed changes acceptable.

The proposal, framed as a potential amendment to the downtown plan, would require review by the Plan Commission before returning to the City Council for possible adoption.

The Planning and Development Committee meeting is scheduled for 7:15 p.m. in the council chambers at the Civic Center.

No agreement about downtown north development (5/19/16)