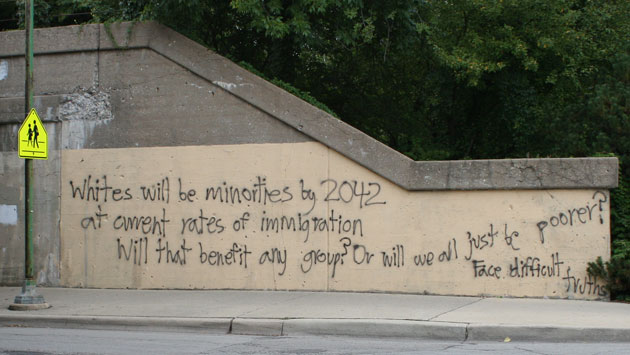 Update 3:00 p.m: Police have arrested a 21-year-old north Evanston man in connection with a series of incidents in which anti-immigrant graffiti was written on railroad viaducts.

Daniel K. Schwartz, of 2011 McDaniel Ave., now faces six charges of criminal defacement of property for incidents that happened between Oct. 20 and this morning.

Police say the graffiti messages began appearing on the viaducts as early as last July.

Cmdr. Jay Parrott says a police officer on surveillance duty about 2 a.m. today observed someone painting the viaduct wall at Lincoln Street and Green Bay Road, but the suspect fled on foot when the officer tried to apprehend him.

Other officers observed a car parked near the viaduct that was registered an address about a mile away, and they set up surveillance at that address.

When a man matching the description of the suspect showed up there, officers detained him, and he was later identified by the first officer as the man he saw spray painting the viaduct.