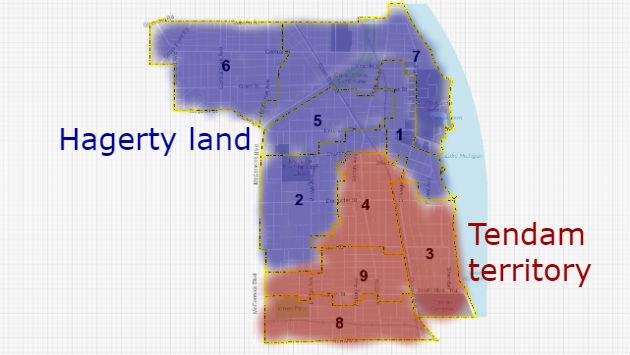 Viewed from the ward level, results in Evanston’s mayoral election split along a sharp north-south boundary.

Steve Hagerty, who ended up with a 159 vote victory in the unofficial tally of votes on election night, won the city’s five northernmost wards — the 1st, 2nd, 5th, 6th and 7th.

Hagerty won all four precincts in the 1st Ward, gaining 57 percent of the vote, and it was only close in the 1st precinct, which has a substantial number of Northwestern University students.

Despite an early endorsement from Alderman Peter Braithwaite, 2nd Ward, Hagerty barely carried that ward, with just 50.34 percent of the voite — and only because of a greater than two-to one margin in the 3rd precinct around Evanston Township High School. Tendam managed to carry the other 2nd Ward precincts — although in the 1st precinct, which includes parts of downtown, he had only a two-vote margin.

Tendam carried five of seven precincts in the 3rd Ward, losing only the ward’s two northernmost precincts to Hagerty. He got 53 percent of the vote in the ward.

In the 4th Ward, Tendam got nearly 57 percent of the vote and carried five of six precincts, losing only the 4th precinct along the western edge of the ward. U.S. Rep. Jan Schakowsky, a 4th Ward resident, had endorsed Tendam.

Hagerty also had the endorsement of retiring 5th Ward alderman Delores Holmes, and he carried her ward with nearly 59 percent of the vote, losing only the 2nd precinct at the eastern edge of the ward.

Surprisingly, Hagerty also won in Tendam’s home base — the 6th Ward, but with just 52 percent of the vote. He carried four precincts there. Tendam won two and they tied in the ward’s 2nd precinct.

And Hagerty carried his own home base, the 7th Ward, with nearly 58 percent of the vote. He had the endorsement of the ward’s alderman, Eleanor Revelle. He did lose the two campus precincts, where the Daily Northwestern had endorsed Tendam. But the vote turnout in those precincts combined was just 31 for Tendam to 11 for Hagerty.

Tendam carried three of five precincts in the 8th Ward and carried the ward overall with nearly 55 percent of the vote.

And Tendam carried all 6 precincts in the 9th Ward, averaging 55 percent of the vote there.

Editor’s note: An earlier version of this story mistakenly placed Schakowsky’s home in the 3rd Ward.