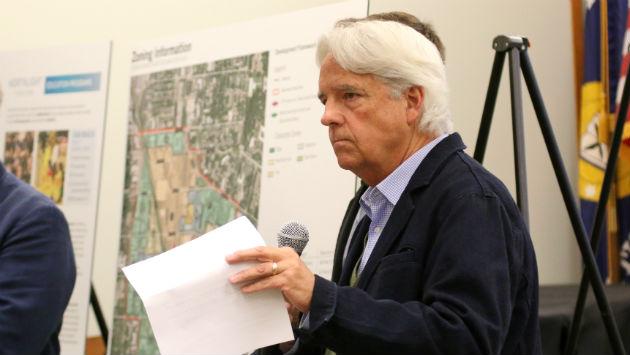 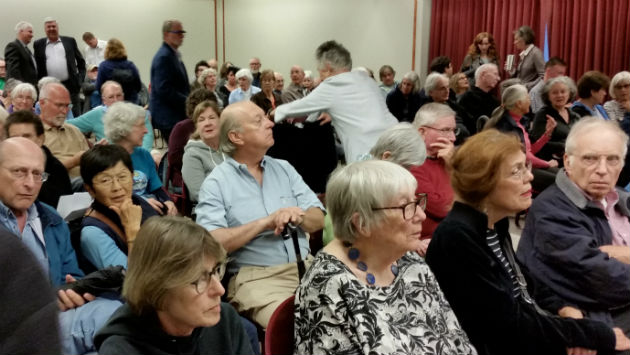 People waiting for the ward meeting to get underway in the community room at the downtown public library.

Most of the audience raised their hands when asked if they were Northlight patrons, and many said they’d love to see Northlight return to Evanston, but most commenters opposed adding another tall building downtown.

Asked how Chicago’s Steppenwolf Theatre Company funded a new building in 1998 and hopes to fund an expansion now, Evans said he worked for Steppenwolf in 1998 and that building was funded largely through state and federal grant money that simply doesn’t exist today.

As for Steppenwolf’s current expansion plans, he said they’re trying to raise $50 million — but they’re a much larger organization than Northlight — with an annual budget of $22 million, compared to Northlight’s $3.2 million.

Northlight will still be raising funds — about $20 million — to build out the interior of the planned Evanston space. To fund the building shell as well with private donations, Evans suggested, would be virtually impossible.

But, he added, “If everybody here has their checkbooks and would be happy to write us a big number …”

Nobody in the audience was seen reaching for a checkbook. 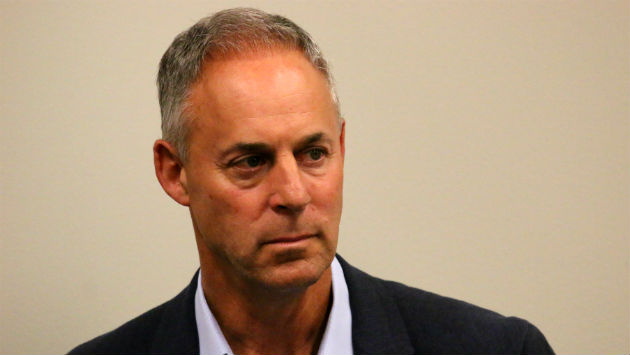 City Manager Wally Bobkiewicz asked how much of a subsidy the developers planned to ask from the city.

Scott Goodman of Farpoint Development said the project is seeking no city subsidy.

He added that discussions are continuing about whether the city would end up owning the parking garage in the building. There was no mention of what compensation the city might receive for vacating an alley that runs through the site, in the 1700 block of Sherman Avenue. 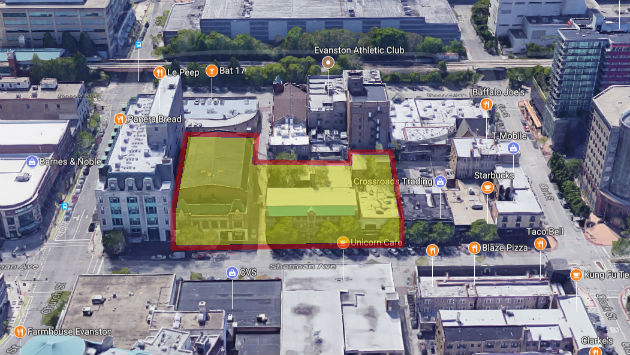 The proposed Northlight development is highlighted on this Google Maps image.

Bobkiewicz said the city would receive several revenue streams from the development — from the amusement tax on theater tickets, the hotel tax and the local liquor tax and city share of the sales tax on meals served in the planned restaurant.

The project also would return one of the buildings, now owned by Northwestern University, to the property tax rolls

Bobkiewicz said the new residents of the building could also be important to retaining the downtown Whole Foods store.

“Their lease is ticking and they’ve said they don’t want to stay,” the city manager said. “So we need a justification, need to have more people shop there.”

“Those nice folks at Amazon” which just bought the Whole Foods chain, “are sharpening their pencils,” he added.

Hank Goldman, a Sherman Plaza resident, said there’s already a lot of empty retail in Evanston and asked why the city needed another tower with even more retail space.

Goodman said the project would help solve the retail vacancy problem — with the theater, the hotel and the apartments bring more people downtown to support retail uses.

The proposed Northlight project would also have only a tiny fraction of the retail space that Sherman Plaza added to downtown.

The Northlight project hasn’t yet begun the city’s formal review process. It appeared, as Tuesday night’s meeting ended, that additional informal meetings may be held before the formal review begins, but no schedule for additional meetings was announced.

The city’s community development director, Johanna Leonard, noted that because the project is seeking planned development allowances beyond the basic level set in the city’s zoning code, it would ultimately require a two-thirds vote by the City Council to be approved.