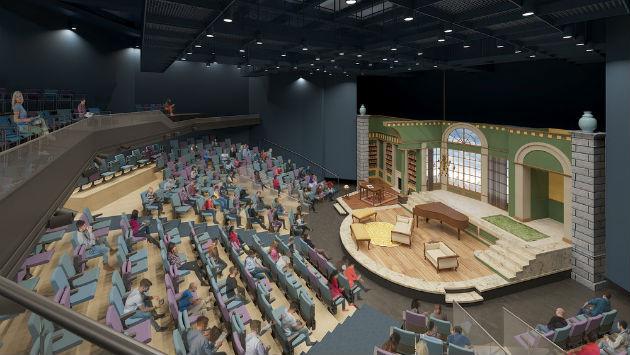 Northlight Theatre’s plans to return to Evanston got mostly rave reviews this week from a room filled with theater-goers at the downtown library.

Tim Evans, Northlight’s executive director, told residents at the 4th Ward meeting Tuesday that the new theater building planned for 1012 Church St. will have an auditorium with 305 seats, slightly fewer than the 318 in Northlight’s current location in Skokie.

“But for many seats in the current space, the site lines are not great. They tend either not to sell or are the last to be sold,” Evans said. “The new building will have more comfortable seats and better sight lines.”

Residents at the 4th Ward meeting.

Evans said the new building’s lobby facing Church Street will be a cafe during the day and a lounge at night. “If you want to hold a meeting, or gather to talk to other folks, this building will be open for that purpose,” Evans said.

A rendering of the planned lobby.

Evans said there are two small parking lots on the block and two large public garages with a total of 2,600 spaces within a couple blocks — as well as CTA and Metra stations, so patron access to the theater should be easier than it is now.

Evans said projections indicate the new theater will result in $427,000 in city tax revenue over its first five years of operation and will generate 115 full-time equivalent jobs, between construction workers and theater staff.

Former Evanston Mayor Jay Lytle said, “This is the most significant project I’ve seen in the last 30 years in terms of the cultural arts in Evanston.”

Northlight, which is continuing to raise funds for the new building, is scheduled to present the proposal to the city’s Design and Project Review Committee later this month. Evans said the goal is to break ground for the new building next spring and complete construction by Fall 2021.