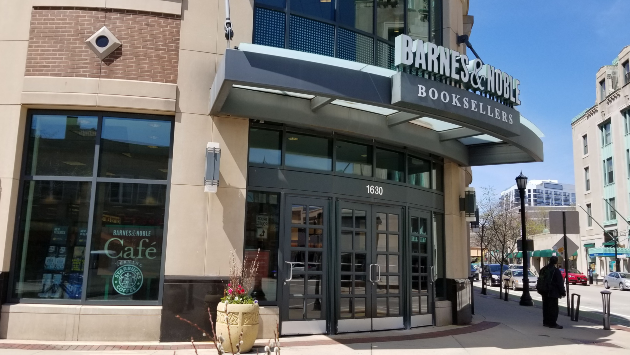 The Barnes & Noble bookstore in Sherman Plaza downtown has closed, and will be replaced by new offices for Northwestern Medicine.

Paul Zalmezak, the city’s economic development manager, says the remodeling of the anchor space at the corner of Church Street and Sherman Avenue is likely to take more than a year.

He says the new Northwestern Medicine location will house a medical practice like the ones Northshore University HealthSystem maintains at 909 Davis St. and 1007 Church St. and that Northwestern will continue to operate its existing urgent care facility at 1704 Maple Ave. in the Church Street Plaza development.

Zalmezak says that Barnes & Noble had reached renewal option date on its lease in the Sherman Plaza development and after considering possibly revamping the space for a smaller format store ultimately decided to close it.

A masked worker clearing out stock from the Evanston store this morning.

The closest Barnes & Noble now is the one in the Old Orchard shopping center in Skokie, but that store, like others in the chain, is currently closed because of the COVID-19 pandemic.

Zalmezak says Northwestern Medicine has been looking to expand its presence in Evanston for several years.

While the closure of B&N will mean the loss of a substantial number of retail jobs, he said the new medical office likely will employ more workers generally earning higher pay and generate new business for other merchants and restaurants downtown.

He also said Evanston has at least nine independent booksellers in different shopping districts around town.

Barnes & Noble has gradually been reducing its number of stores over the past decade as it faced growing competition from Amazon. It recently said the temporary closure of most of its stores because of the pandemic would likely force layoffs and require other cost cuts.