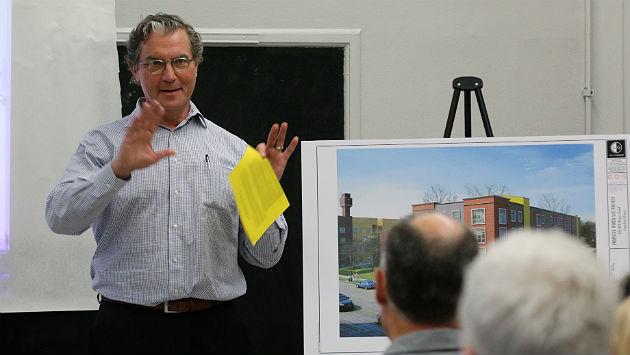 And he said the financial cost of meeting the city's requirement for subsidized units drove the need to include a total of 44 apartment units in the development.

The project plans drew a mixed response from about 60 neighbors who crowded into a classroom at the Noyes Cultural Arts Center. 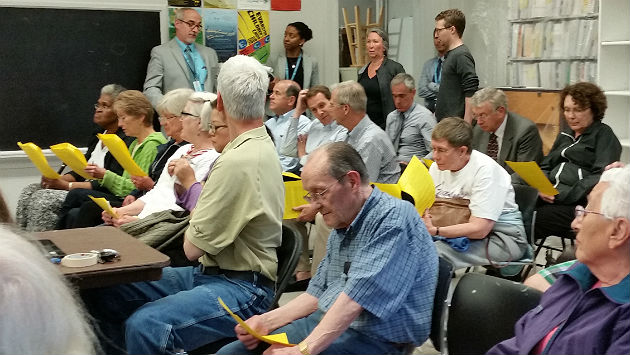 Neighbors studying a yellow fact sheet about the project before the meeting began.

Some said they thought it would be a good addition to the neighborhood — that the location adjacent to the CTA tracks was a good spot for a building of its size and that the plan to provide 3,200 square feet of retail space for a new neighborhood restaurant would help support the small commercial district around the Purple Line stop.

But a larger group of neighbors brought up familiar complaints about students, parking, height and density.

DeStefano said that under fair housing laws he could not refuse to rent to students. But he said the building's design — with minimal amenities — no roof deck, no workout or meeting rooms — should reduce its appeal to students.

He said the project is providing the 35 parking spaces required by the city for a residential project of its size in a transit-oriented-development area.

He said he'd originally planned a smaller retail space which under city rules would not have required any additional parking, but after hearing from a number of potential restaurateurs who said they'd need a larger restaurant space, he increased the size to 3,200 square feet — and he's asking the city to waive its requirement for five retail parking spaces.

Some neighbors seemed most concerned that DeStefano's plan to charge $150 a month for parking spaces, in addition to the unit rents, would cause tenants to try to park on the congested streets in the neighborhood instead. 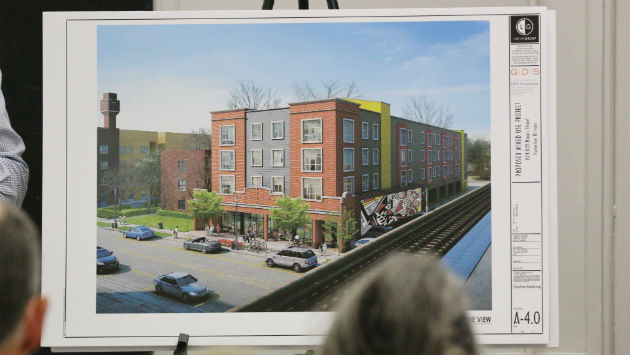 A rendering of the building as seen from the CTA platform.

Other neighbors said the four-story building was too tall — although several vintage apartment buildings nearby are nearly as high.

DeStefano said the project wouldn't be economically viable without the four-story height and said that the total lost value to the development of including the subsidized units was $652,000.

The developer, who grew up in Evanston and attended the former Noyes Elementary School where Tuesday's meeting was held, said he planned to preserve most of the existing 1929-vintage retail building on the site — building, constructing the new apartments on top of it. Surface-level parking, covered by the building would be to the rear of the lot. 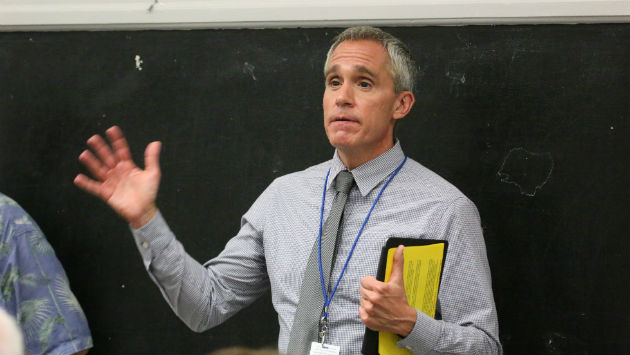 The city's community development director, Mark Muenzer, told residents that formal review of the development would start with a city staff committee review later this month, followed by Plan Commission hearings that may begin on Wednesday evening, July 13.

Depending on how long that takes, he said, the project could be before the City Council for a final vote in August or September.